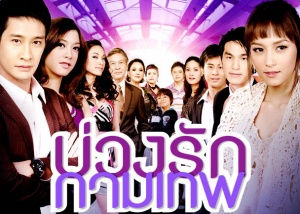 Pong’s character is Phubodee, a man summoned back to Thailand from America by his very concerned mother Sumon (Duangta Tungkamanee). They have a family crisis, his younger brother Pawat (Ton Chayathorn) has fallen in love with a woman from the wrong side of the tracks. The woman is Oranee (Noon Boonyasak), she is 5 years older than Pawat, a divorcee, and works as a seamstress. She has one abrasive younger sister, Ornicha (Bee Namthip) who works as a nurse.

Phubodee tries to separate Pawat and Oranee with money. It backfires on him because Ornicha felt insulted and violently turned down the offer. Oranee informs Pawat about the money offer and in turn Pawat becomes more estrange from his brother Phubodee and mother Sumon.

Since buying them off didn’t work, it’s on to plan B. Phubodee lies to Pawat that Oranee is not the problem as to why they disapprove, it’s really about Prawat and his lack of life experiences. Phubodee wants Pawat to move to America for 1 year, manage their growing company, and if he does a good job, within that one year, Pawat is allow to come back and marry Oranee without any objections from the family. Oranee doesn’t buy it and wants Prawat to stay in Thailand. To assure Oranee that he is not abandoning her, they secretly wed and Pawat’s friend Tawee (Tui Pakorn) acted as their witness.

While Pawat is away in America, Phubodee works with Nina (May Pitchanart Sakakorn), the daughter of Sumon’s best friend, to make it seem like Nina and Pawat are dating. The news of Nina and Pawat dating makes Oranee feel a little anxious; however, she could not dwell on it for too long because her father Uthai (Santisuk Promsiri) suffered a stroke and they did not have money to pay for his hospital bills. Phubodee heard about this and took the opportunity to give Oranee some money with a price. To receive the money, she must break up with Pawat. With no other choices, Oranee takes the money to pay for her father’s hospital bill and surgery.

Gleefully, Phubodee lies to his younger brother that Oranee has agreed to his money offer and Oranee is just another woman concern only with money. Pawat doesn’t believe him and quickly takes the next flight back to Thailand to confront Oranee. Sadly, Pawat dies in a car accident, his car flipped over.

After learning of her husband’s death, Oranee becomes deeply depressed and tries to commit suicide, but fails. She is discovered by her sister Ornicha and is rushed to the hospital where she learns she is 2 months pregnant with Pawat’s child.

Also during this time, Phubodee learns from Tawee that Oranee and Pawat are legally married and Oranee has rights to Pawat’s inheritance. Phubodee forces himself to search for Oranee to handle the inheritance issue. However, he can not find her. According to Gipgay (Pang Ornjira), Ornicha’s co-worker and best friend, they have moved to the provinces to start over and to get away from Phubodee and his mother.

Ornicha takes her sister Oranee and father Uthai back to their home province of Maehongsorn. The pregnant Oranee becomes a homemaker while Ornicha continues her profession as a nurse at a local hospital, and their father farms. All is well until Oranee gives birth, she delivers her son Tonklah (Plengtai Niyomtai) to the world and dies from excessive blood lost.

Back in Bangkok, Phubodee becomes chairman of his family’s company and also begins to feel remorseful about his involvement in Pawat and Oranee’s break up. After 5 years of searching, Phubodee learns that Oranee has passed away and has one child, a boy. Phubodee doesn’t doubt the child is his nephew and informs his mother who wants to find the little boy and raise him. They look for the child but can not find him.

Several months pass, Ornicha’s father Uthai dies. Giftgay travels up north for the funeral and entices Ornicha about work in Bangkok, they are in desperate need for nurses and the pay is good. Since she is on her own and has a young nephew to care for, Ornicha moves back down to Bangkok to find work at the hospital.

One day, Phubodee takes his mother Sumon for a routine check up at Ornicha’s hospital. There, after 5 years, Phubodee and Ornicha see each other again. While Ornicha recognizes him, he doesn’t recognize her. She has grown up a lot and into a very beautiful young woman. They both take notice of each other. Ornicha wants to destroy him while Phubodee is clueless and is intrigue by Ornicha.

Every time she sees him, she makes an effort to humiliate him in public. Her cruel tactics reveals her true identity. Several more encounters with Ornicha and Phubodee realizes that she is the woman he has been looking for these past 5 years.

To find his nephew, Phubodee follows Ornicha home one day. He sees Tonklah at the house and immediately knows that it’s Pawat’s child because they look very similar. Phubodee confronts Ornicha about Tonklah and she lies that it’s her child. Phubodee doesn’t believe her and wants a DNA test to prove it. Since a DNA will prove the truth, Ornicha confesses that she is the aunt and not the mother; however it doesn’t matter because she is never going to give up her nephew to Phubodee . Legally, she is Tonklah’s guardian. Since the law is not at his side, Phubodee must find another way to win custody of his nephew.

May is the nang’rai, girl villain for this lakorn. Her character is Nina. At first she wanted to get with Pawat, Ton’s character, since he passed away, she is going to go after Phubodee (Pong).

Tonklah is the center piece of the story.

Pang will be playing Giftgay, Bee’s best friend and co-worker in the lakorn. Ton will last a few episodes and his character will be killed off.