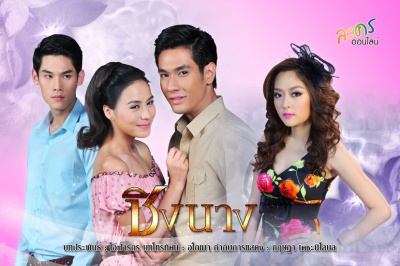 Four brothers: Preuk (Note), Pupah (Om), Meka (Kan), and Aroon (Ko) all love Wong Deuan (Rotmay) and try to win her heart. Preuk, the eldest of the brothers, is the most understanding and of course, most mature. He becomes the next owner of the Saen Samut, who was founded by his grandparents. Meka, who takes after his father, is a doctor. Aroon, who is the youngest, is the weakest and has an illness. He is also self-centered because he knows all of his brothers like Wong Deuan but he wants her to himself. Pupah, on the other hand, our pra'ek, is the playful and outgoing one. He feels useless around his family because everyone has their own occupation but he doesn't. One day after an incident, Pupah gets kicked out of the house by his father and goes to live far out in the country, which is the land secretly given to him by his grandmother. Right before he leaves, he asks Wong Deaun to run away with him but Aroon fakes a sickness to prevent Deuan from going. The competition for Wong Deuan continues as more people are entangled in their story.

Arun really want Duen heart that he began to hate pupa for liking Duen because Arun want Duen to be him only him. But the four brother have a big crush on her in there heart but Duen give her heart to pupa as the sencond brother. Wong Duen did not like Arun but she promise to marry Arun. Before she promise Arun to married him grandma of the four brother died of hitting a train. So then Duen came to where pupa is at the north. When Duen arrive at the north she saw Nuna little sister she didn't know she was from the Wong Duen farm so when she heard that pupa is going back to his home for Wong Duen and Arun wedding at the south she ran fast as she can to stop the train. Then they took Duen to the farm and Nuna was just talking and suddenly pupa as Om said Duen Duen and they huge each other in front of Nuna. Nuna was upset and mad at her loving Pupa for nothing.