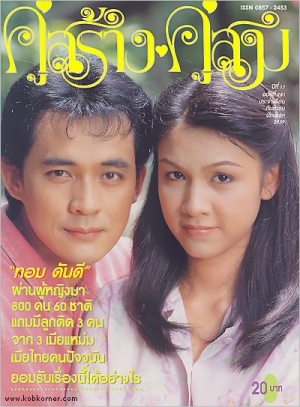 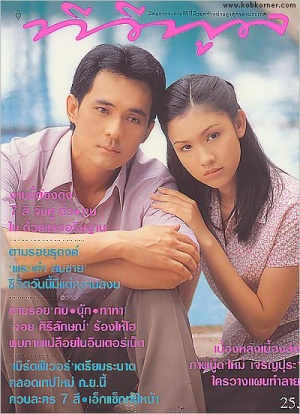 <showhide> Vorada (Kob) is a daughter of a rich man and his unlawful wife, even though her mother was the first wife. Her father has a married wife (legal one) and has another daughter who is younger than Vorada. Vorada's step mother and half-sister hate her. Her mother died since she was very young. Her step mother hate her because she hates Vorada's mother since her father love her mother more than his lawful wife. He married the second wife because of their parent's arrangement. Vorada's half-sister hates her not only because of the above reason, but also because she loves Grit (Saranyu) while Grit loves Vorada. __HIDER__

<hide> Grit has 2 sisters. The younger one also hates Vorada because she loves a man who loves Vorada. One day, Grit tells Vorada that he wants to see her at night (by the way, they are lovers) to talk to her about his decision (his parent doesn't want him to marry Vorada since Vorada's step mother saying all bad things about her). That night Vorada waits for Grit and was hit on the head without knowing who did it. When she wakes up, she finds herself inside the underground shelter (that she and Grit accidently discovered and keep it as a secret). Vorada is so frighten. She thinks that Grit wants to kill her because she doesn't worth anything for him to marry her. Inside the shelter, she is hungry, cold and tired. Before she dies, she make a strong vow that if she is born again, she will be a much stronger person. She will seek the revenge from the person who tried to kill her. Then she dies.

Vorada then was born again as Nattamon. Nattamon is a girl who has a supernatural power. She is a very strong girl, but always has a nightmare. When she grows up, she starts to know why she was born again. She was born to seek a revenge. She always thinks that Grit wants to kill her. When she first meets Grit (he is in his 40's while Nattamon is in her 20's) she knows that this is the person who she is looking for. For Grit, he sees a woman who he loves the most come back again. Nattamon has tried many ways to hurt him, but she always changes her mind.

By the end, she knows all the truth. The person who hit her in her past life was her half-sister and Grit's younger sister. That night, Grit cannot go to see Vorada because he had to take his mother to the hospital so he told his sister to tell Vorada not to wait for him. However his sister didn't tell Vorada. Instead she told Vorada's half-sister to trick Vorada. When they hit her on the head, they brought her inside the underground shelter (Grit had talked about this place to his sister) and lock the door. Vorada's sister thought it was going to be only the fun thing while Grit's sister was serious about it.

Later, Vorada's sister forgot about her sister that was locked inside the underground shelter (since she was busy finding a university to study). Few days had passed and everybody thought that Vorada had ran away with another guy. Grit didn't believe that. He kept searching for her. Vorada's sister felt very guilty, but Grit's sister told her to keep it as a secret if she didn't want to be caught as a criminer. Later, there was a girl go play around the underground shelter and heard some voice from there. Grit then broke the lock and went inside. There, he found Vorada just passed away. Her body was still warm. He was like crazy. He stays single till he meets Nattamon. Vorada's sister died in the car accident with her mother couple years later after Vorada died. They didn't live in the house since Vorada's father thought that his lawful wife was the one who killed Vorada while his wife thought that her daughter was the one who did it.

Vorada's sister was born again as a daughter of Grit's younger sister, but she is deaf. The main person who wanted to kill Vorada is actually Grit's sister. She tries to kill Nattamon again, but Nattamon is not Vorada anymore, she fights back. She actually wants to kill Grit's sister, but Grit tells her to forgive the one who hurts her. It doesn't make her happy if she kills anyone.

Later Nattamon forgives all people who had hurt her in the past life and then she stops having the nightmare. She then finds out that she still loves Grit. That's why she wants to make a revenge. In the end, Grit and Nattamon understand each other and have a happy life. The End