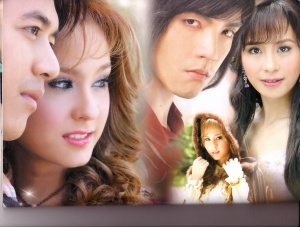 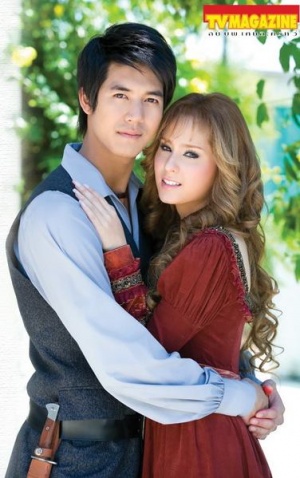 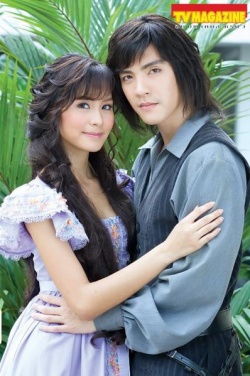 Tasika is a princess. Pee Chai is her brother, whose the king of their country. Romney is the princess of a country different from Pee Chai's. And Pee Kat is the king of another country. Romney is suppose to marry Pee Kat becaue Pee Kat wanted her country, which was near the sea. Along the way, Romney escaped. While escaping, she landed onto a trap. Pee Chai comes to the set trap. He was out hunting. When they opened the trap, Romney fell out. Pee Chai took Romney to his place. Romney stayed at his place. There, they fell in love. Pee Kat was in Tasika's country when he saw Tasika. He fell in love with her. When Tasika went out on a horse ride, she strayed away from the group. She got lost. Then she met Pee Kat. Who then drugged her later on and took her to his kingdom. They fall in love, Meena tries to destroy their relationship because she's in love with Pee Kat. Meena's dad is the evil guy. Her dad wants power. So he tries to get rid of Pee Kat. Tasika and Pee Kat fall in love.

Dung Duang Harutai is the story of three kingdoms. Kasit ruled by King Rungsimun (Weir) is the wealthiest and most powerful but they lack a sea route, for this reason King Rungsimun had planned to politically wed Princess Munisala (Rotmey) of Thanta in order to conveniently use their water route. However if both Kasit and Thanta were to unite that would cause Puntoolat to become isolated and for this reason the three kingdoms have longed lived with suspicion of one another. Princess Munisala decided to flee in order to escape the wedding because she had heard many ruthless stories about King Rungsimun but she accidentally fell into a trap and was rescued by Prince Tiyuttithorn/ Pee Chai (New) of Puntoolat where she asked to seek refuge. Upon hearing the news of Princess Munisala's disappearance and learning that it may be linked to Pee Chai, Princess Tasika (Kwan) feared the start of a war and so she made her way to speak to Pee Chai and got kidnapped by King Rungsimun and brought to Kasit. Tasika believed she was kidnapped as a hostage in order for Kasit to negotiate Munisala's return and so she began at first to dislike Rungsimun. However Rungsimun had fell in love with Tasika at first sight and so began their love story, but things get complicated as Mina (Nok) constantly stirs up trouble, by trying to harm Tasika as she was in love with Rungsimun. Meanwhile Munisala and Tiyuttithorn also started to slowly fall in love. Matters get complicated as Mina's dad committed treason against Rungsimun, where he was severely injured and brought back to Puntoolat by Tasika. The two couples begin to come to an understanding of each other and Rungsimun and Tiyuttithorn resolve their differences and suspicions. However Tasika was kidnapped by Mina and brought back to Kasit where she is being forced to marry Mina's dad, in order to unite Puntoolat and Kasit and secure Mina'a dad reign, however Rungsimun and Pee Chai interfere with his plans. In the end peace is brought back to Kasit and it is love that united the three kingdoms. At the end, King Rungsimun (weir) was married to Princess (kwan) and live happliy ever after, oh yeah also the other ones, the prince and the princes

From the depths of wars brings a folktale about the legend of their love among three kingdoms GASIK, PANTURATH, and THANTA... Gasik a country in the north. But does not have acess to the sea so he sets up a date to get married to pricess manisala (princess of thanta) who has acess to the sea, for transporting goods. the unite of the two countries made Panurath the only country without allies. Then prince Tiyuttithorn (prince of panurath) who is a brave soldier coudln't ignore this matter while his younger sister Tissika (princess of panurath)is worried that a war might break-out.Before the marriage while princess manitsala was being sent to Gasik for marriage she escaped from the carrige because she doesn't want to marry someone she doesn't love, then on she ran to a trap made by prince Panurath.Prince Panurath took her to his place because she had fainted and so. so then Princess Manitsala is gonna stay with Prince Panurath for now. While Princess Tassika is going for a ride to see her brother (on a horse because she had heard that they found Princess Manisala). While on her way king of Gasik (weir) killed Princess Tassika's bodyguard so now she is along and lost. While she is lost and is finding her way out she stops and sees a guy at the fire. She asked if she could share the fire with him and he nod yes. then they talked a while. While he was giving her tea he drugged her and she notice right after that she was drugged. Who could've drugged this Princess Tassika? i know but i could go on and on if i tell you so it's better if i stop and if i don't stop you might not even watch the movie any more because i told you what all happend. but this lakorn i would reccomend to any one who is a weir fan, kwan fan (me) or even a new fan and lasty rotmay fan.... basiclly if you like any of the pra'nangs... YOU BETTER WATCH IT EVEN WITHOUT SUBS ITS STILL GOOD BECAUSE I'M NOT THAI AND I GET IT PERFECTY FINE!!!!!