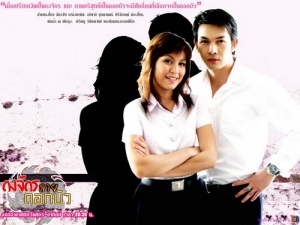 Nok Chatchai plays a man who runs away with his rich girlfriend. After awhile Nok becomes a drunk while his wife is very ill. She eventually dies and Nok promises to establish a good life for his son so he lets the monk take care of his son until he is stable. 20 years or so later Aum is bullied for his status and such and Nok becomes rich involving drug dealing. Nok and his boss's wife is having an affair and the wife is crazy about him. Nok finds out Aum is his son and is always out to protect him but never tells him who he truly is. Eventually Nok goes on a killing spree to make the people who know about him to keep quiet. He tries to kill the monk that raised Aum but ends up stabbing Aum. Nok's boss's wife comes out and shoots him and he dies. Aum becomes a monk, is unknown of he and Joy end up together.