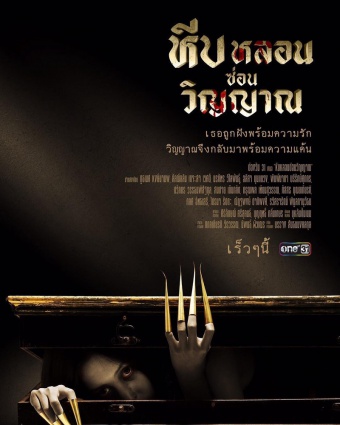 The story starts in the small Province of Chiang Mai where Koom Sai Karm is located. Euarngjun is a beautiful dancer with many men who desired her. She fell in love with the son of a millionaire, which leads to a chain of events and misunderstandings that resulted in her death. She was killed by being caged on a casket that fell in a lake. Nobody was able to find her. But her spiteful spirit is inside the casket, waiting to seek vengeance. Many years later, there are rumors and tales about Koom Saai Karm and how there are ghosts. Many villagers met a ghost and their heads were pulled into the water. Every night at full moon, they would hear the drum and loom sounds. Sai Mai just finished school wants to start a homestay business at Koom Saai Karm, an old home which everyone in her family forbid her from going there. But Sai Mai insists and invited her friend Timsarm to go with her. At the airport of Chiang Mai, Sai Mai encounters Pansa, a young police officer, who had just moved to accept service there, was impressed with Sai Mai at first sight. Once they arrived at Koom Saai Karm, they met the caretakers of Koom Saai Karm. From there, they encountered the weird sounds and surroundings. Source: MyDramaList