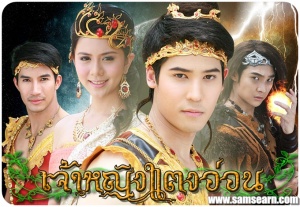 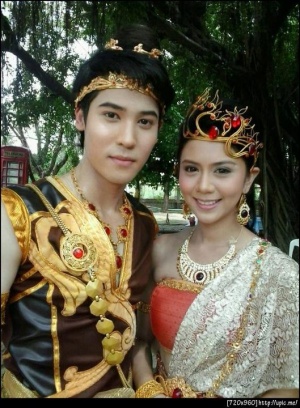 Jantawadee(Namfon) gives birth to a son name Waiyaraat. The king was happy and gives him the title to heir of throne. Rasameetaywee(Candy) is a generous person decided to leave the palace in order to observe the religious practice in the forest, but was caught by devils and was about to get eaten but was saved by Pra In(Lek). After that, Rasameetaywee became pregnant and gave birth to Tang On and Waigoon. The king then changed the title of the heir to Waigoon. An amaat raised Waiyaraat up to hate his brother. Waiyaraat departed from his kingdom and went to became a student of the evil devils. When he grew up, Waiyaraat(Tar) returned to the Kingdom to take over. Everyone fled. Waigoon (Pon) stayed behind to fight Waiyaraat, but he got knocked out. TangOn(Kukkik) came back for her brother but was slain. With the help of a yak, Waigoon was able to bring Tangon back to life. Later they stayed at a hut but Waiyaraat kept sending asoons after them to try and take Tangon. Tangon cooked some food, not knowing it wasn't good and gave it to waigoon. He starts turning into an alligator and flees from TangOn.

Prai Ngaam(Ek) shows up later, but his parents engaged him to 6 wives already. He went out and saved TangOn several times from being taken by the Asoon and finally met TangOn and asked her to return with him to his kingdom. She agreed and went with him and became his wife. All the other wives were jealous of her. Waigoon is able to turn into human only at night time and comes see Tang On and she gives him food. The 6 wives finds out and tells Prai Ngaam. Prai Ngaam goes one night and sees TangOn hugging Waigoon and thinks that TangOn was cheating on him so he fought Waigoon and Waigoon fled. They were going to execute Tangon but finds out she is pregnant so locks her up instead. Tangon gives birth in the prison cell but one of the wives swap her child for an alligator, so Prai Ngaam thinks that she did cheated on him. She is going to get executed again but a asoon comes and takes her to Waiyaraat. Waigoon goes to rescue his sister...