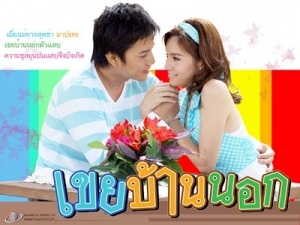 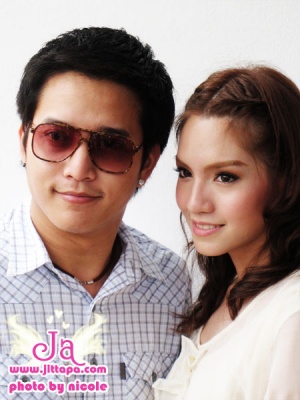 N'ake comes from a rich family. Her mom is always trying to set her up with guys who are from the same class as her. She doesn't like that her mom does that. She went on a get-away to their farm to rest her mind. She runs into p'ake. They become friends. Somehow, they ended up getting stuck in a hut together and got rained in. People came and saw and thought they had did something. Her mom thought the same thing. It made n'ake very angry that her mom would think that so she said yes, she did have something with p'ake but really they didn't. She then asks p'ake to get married to her fakely until she can get her mom to leave her alone. Of course, they will eventually fall in love.

Keuy Bann Nok is a remake of a famous Thai novel of Penkae Wongsanga. It was made into a movie one time and two other times as lakorns. In this version, it was produced by TV Thunder and on air on Ch.3.This is the third collaboration between Tui Kiatkamol and TV Thunder and the director, Boom-Pakasit.

Chomsopa (Ja Jittapa), a daughter of a Minister, Supoj (Toi-Settha) and Lady Siree (Tuk Duangta) just graduated from the U.S. and came back to Thailand. Lady Siree tried to find a perfect man for her daughter to marry and always telling men to come courting her. Chomsopa was tired of her mother's plan so she went to the ranch of Supoj in the country side to take a break from her mother. There, she met Kamnuan (Tui Kiatkamol) a son of a small resort owner who lived next to her ranch. Chomsopa and Kamnuan secretly started liking each other since their first meet. Being bored, Chomsopa asked Kamnuan to take her to see the waterfall, however on their way back it was raining, so Kamnuan took her to take shelter at a small hut - they had been together for almost all night until the rescue team found them. Lady Siree misunderstood Chomsopa, thinking that she slept with Kamnuan; Chomsopa was angry that her mother didn't trust her so she lied that she and Kamnuan had slept together and that she wanted to marry him. Kamnuan was looked down by Lady Siree for being a low life country boy, so he decided to marry Chomsopa and go along with Chomsopa's plan to give her mother a lesson...and that was how the battle between a sassy mother-in-law and a cheeky country son-in-law began...