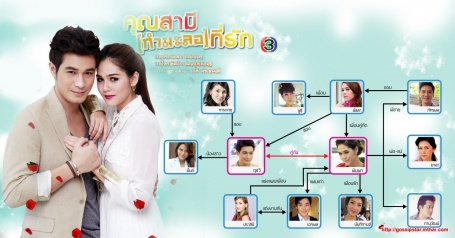 Khun Ton is a writer who writes romance novels. Pimmapa is a brand manager at a cosmetic brand called Naree. Story starts out with Khun Ton taking pictures at a villa on the mountains and accidently captures Pimmapa on his camera. He is immediately memorized by her beauty. They have a short encounter where he returns her lost phone to her and they go their separate ways. Long story short, Pimmapa comes back to Bangkok and finds out her boyfriend P'Eak cheated on her with two women on her wedding day. She meets Khun Ton again on her vacation and they being to hang out. They come back to Bangkok again separately and things happen that leads Pimmapa to the bar where she gets drunk and is saved by Khun Ton from being kidnapped by bad men. He takes her to her condo and as she is drunk, she tells him about her corrupted wedding day and her horrible cheating ex-boyfriend. Khun Ton comforts her and tells her that there are still many good men in the world. Pimmapa forces him to sign the marriage certificate that she still kept from the wedding day. After a bunch of convincing and making him feel guilty, Pimmapa successfully gets Khun Ton to sign the marriage certificate. The next morning, they both wake up and Pimmapa finds out they both are husband and wife because they signed the marriage certificate, but because it was not turned into the state's office(or something like that), the marriage was not official. However, Pimmapa convinces Khun Ton to pretend to be her husband for the sake of her parents and he agrees. They end up being fake husband and wife through the story but begins to develop real feelings towards each other because of their jealousy. Khun Ton is jealous of Pimmapa because her boss Khun Triwin is in love with her and tries to get close to her. Pimmapa is jealous of Khun Ton because his almost fiancée Karakade finally meets him and she wants him. She pretends to be a good girl in front of Khun Ton's grandma, but is actually a very evil person. Bad things happen because of third wheel people in the story that wants Khun Ton and Pimmapa to separate. However, Khun Ton's sister Mint and his cousin Kingkaew, Pimmapa's friends and family supports them being together, even though they all found out that the marriage was fake. In the end, the bad people loses and Khun Ton and pimmapa ends up together. The ending scene is at the same villa where Khun Ton first captured a picture of pimmapa. They hug, kiss and do all those lovey dovey things that happen in every thai lakorn. The End.

Author's Note: Honestly, the lakorn is a hundred times WAAAAAAAAAAAY better than my summary. I really recommend everyone to watch it. I'm a huge Rome and Rita fan, but after watching this lakorn, I also became a Rome and Chompoo fan. I think they are so cute together.