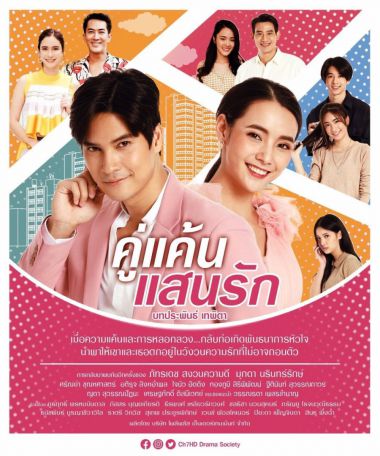 Songkran is a real estate mogul a total womanizer with a son named Pe. But he didn’t start out like this, though. Pe’s mother left him when he was young to be with another man. Kran was heartbroken and began treating women like toys and gained the nickname ‘Invincible Casanova’ along with his best friend Sia Ou who runs a modelling agency.

Ingdao and her family own a large orange farm. She’s the type that takes no crap from anyone. Thanks to her huge mole and unkempt appearance she is often viewed as ugly. Nevertheless, she has a boyfriend named Nu, a dashing and mild-mannered teacher from the same town.

Songkran and his father have been eyeing a piece of land that Ingdao’s father, Saeng, currently owns. It was given to him by his late wife so he cherishes it very much.

One day, Ingjun, Ingdao’s little sister who had been studying in Bangkok, finally gets sick of all the odd jobs she has and decides to apply for a job at Songkran’s company along with her friend, Marin. Both Ingjun and Marin are accepted as accountants.

Songkran made connections between Saeng and Ingjun and came up with a plan on how to get his hands on that piece of land.

Songkran begins to woo Ingjun and she falls for him hard and fast. His family is even in on the plan, acting all loving when she visits their home.

Soon, she willingly signs over the rights to that piece of land her father had given to her. She was able to come to this decision because of her rocky relationships with her own father.

After Songkran obtains proper documents, he leaves her. Ingjun was devastated.

Furious, Ingdao wants to take revenge for her younger sister who tried to commit suicide along with getting their land back.

But knowing that Songkran will never fall for her in her current state, she is helped by her best friend Moddaeng and transformed into a gorgeous woman named Daopradub. (credit to:mydramalist)