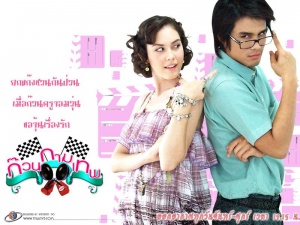 Duang Dao wants her only daughter Gaysara (Matt Peeranee) to marry into the Trakunaphibuna family because in the past she failed to be a daughter-in-law in that family. When her daughter, who is half Thai and farang returns to Thailand, she immediately sets her plan in motion to trap Watit (Tye Nattapol), the male heir to the Trakunaphibuna family. Duang Dao’s master match-making plan is helped by her three good friends Plerntha, Somporn, and Nualnoi.

Duang Dao trains her daughter to be a polite and obedient, which opposes all of Gaysara’s personality. In reality, she is outrageous, spontaneous, and everything Watit hates in a woman. Watit is an old-fashioned and conservative man, he doesn’t want a wife who stands beside or ahead of him, he wants a wife who is subservient and stands behind him, literally.

Though Duang Dao tries her best to pair Watit and Gaysara together, she ultimately fails. Luckily for her, her mother Raunthong is friends with Watit’s grandmother.

In the end, Watit escape his fate with Gaysara, he is force into an arrange marriage with Gaysara by his grandmother. Watit gives Gaysara his name but does not take her as a “wife”, meaning they are legally married but they don’t have relations.

Because they are polar opposites of each other, Watit is a strict conservative man and Gaysara is a spontaneous fun woman, they often fight. Eventually, love develops in their marriage as they learn to appreciate and see the value of each other’s differences.

For a while, things were going well for Gaysara and Watit until Roger, Gaysara’s ex-boyfriend comes into the picture.