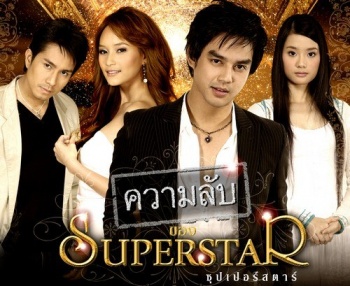 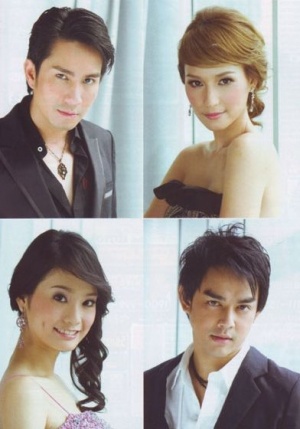 The title says it all, but the main focus is on Gun, the hottest P'ek in the business. Natedao is an up and coming actress that uses her talents to get to the top...but not her acting talent. She uses her acting talents to get Gun to fall for her, so she can be with him, to be on the same level as he is. Gun's mom, Upsorn, gets her daughter's friend Parn to help her son out by being his maid. Gun's fame and career consists nothing but drama, just like the ones he stars in...It's when he's home alone with Parn where he gets to live a normal life. The two used to play together when they were kids, and Parn grew to be very thoughtful and considerate when it comes to Gun, and she is always there to distract him from his crazy life...while Nate continues to pull him into her craziness. This lakorn may seem like it's the lives of the stars in Thai's entertainment industry, but it's more about family than anything. They show the relationship that Gun has with his mother, with his estranged father, as well as with the woman he loves. In the mess of people doing anything possible to get to the top, the sabotage, the gossip, and the secrets, it's refreshing to see a softer side to the business...when Mos falls in love with Parn, and through a turn of events, she ends up being pregnant with him. Everyone on Gun's side do all they can to keep Parn's pregnancy a secret, because Gun is publicly engaged to Nate, and they only got there through Nate's manipulation and deceit. Nate decides to reveal Gun's secret, and turns his fans, as well as everyone in the business against a man that had an affair with his servant and got her pregnant...Nate forces Gun to choose between his career or his family...and he surprisingly chooses his family. It seems like the world has turned their backs on Gun, to Nate's delight, but little does she know that his career isn't more important to him than his family is...but this rollercoaster of emotions isn't over yet. You'll have to tune in on Monday-Thursday to find out what happens next.