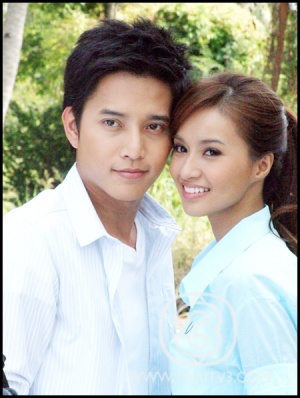 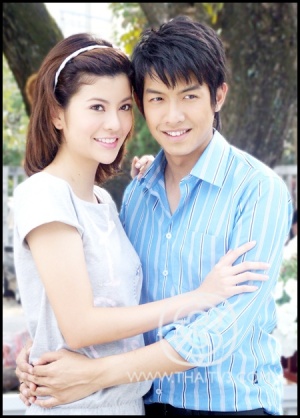 Gamnarn Danai, The Handsome Headman of the village “Din Dam” has a young daughter that is innocent, headstrong and isn’t afraid of anyone named Tangmoe. Everyday she gets into trouble with crooks because she has to bring justice and peace to the village. Because she lost her mother at a young age it causes her to be very protective of her father so once she comes to meet a new widow Yupin Tangmo pours her heart into turning her father into a better person and coming out with many trickery to let her father get with Yupin, but after many years Yupin finally softens up and accept Garmnarn Danai.

Because Garmnarm Danai is a very flirtatious man Yupin and Tangmo must tag team to get rid of his kik’s (side girls). One in the many includes Wantar the owner of a restaurant who has many men that comes into her life to flirt with her. Because Tangmo is very rowdy Garmnarn Danai wish’s that there would be someone who comes and subdue and tame his daughter

Not so long afterwards a young man with a rich father from Krung Thep (Bangkok) the son of “Cabinet Minister Som Sak” and “Lady Yupa Pak” Deputy Chief Chaiya is stationed in Toong Din Dam; he is very happy because he has been wanting to flee from his ex girlfriend Taywee. Once the two meet they argue to death because Tangmo believes that Blat Chaiya is a lustorous satyric man who was just released from prison. He is welcomed by Tangmo with both elbows and knee’s. Instead of being angry with her he falls in extremely in love with her. Blat Chaiya then does everything so that Tangmo can see that he is diligent also. This causes Tangmo to start and fall in love with Blat Chaiya without knowing it. Once Blat Chaiya asks for her hand in marriage she accepts, but once she accepts the news spreads out and there is a problem at the same time “Tatny” the owner of a beauty salon who is in love with Blat Chaiya comes and have a mental war with Tangmo.

Because of jealous Tangmo goes and talk to her best friend “Pak Boong” but she is unable to help because she too also has issues because Tong Yoi who is Blat Chaiya’s close employee likes her and has been attempting to flirt with her, but Pak Boong doesn’t like Tong Yoi she likes Anan a young man with a rich father who is the best friend of Pan Pootay who is in love with Tangmo also. Not only that but Natee who secretly loves Blat Chaiya since first sight and at first she wouldn’t accept, but Tangmo uses force and her knee’s and elbow to force her enemy to disperse.

Blat Chaiya is happy that Tangmo see’s his value and in their wedding it’s very chaotic to where it nearly turns into a funeral when Tatny and Natee invades the wedding in a brides and groom outfit. In the end the two still is able to drink the moon’s honey. Garmnarn Danai is happy to the fullest to have a buddy that’s a man and ends up once again going out to involve himself with his many girls again forcing Tangmo and Yupin to once again go after his Kik’s

But then there is a big war once Tayvee says she is also Blat Chaiya’s wife. This causes Tangmo to be very upset and angry to the point where she asks Blat Chaiya for a divorce, but Chaiya refuses and the two make up and Tagnmo gets pregnant and everyone is very happy. They throw a big party to celebrate the fact that his daughter has a happy family finally.

Deputy Chaiya (Tui Kiatkamol) is transferred to work in the district called “Toong Din Dum.” He is determined to develop the area and gets rid of those who take advantages of villagers. At Toong Din Dum, Tangmo (Namfon Patcharin), the village chief (O-Warut)‘s daughter is well-known for having hot-tempered and likes to take justice in her own hands. On the way to Toong Din Dum, Chaiya meets Tangmo and she thinks he is a pervert, so she beats him up. Later it is clarified that it was just a misunderstanding, so she gets embarrassed and doesn’t like him even more. Chaiya likes Tangmo from the beginning and likes to tease her. Tangmo is also pursued by Pann, the cool man (Yingyong Yodbuangam), a son of Master Huad (Nino Metani) who is the most influencial man in Toong Din Dum. Master Huad always takes advantages of villagers, and hates Chaiya for getting in his way. Despite the conflict, Tangmo helps Chaiya working to help the villagers and slowly she develops feelings for him. Together, they work to help Toong Din Dum to become a better place… Credit: rtn1212.wordpress.com