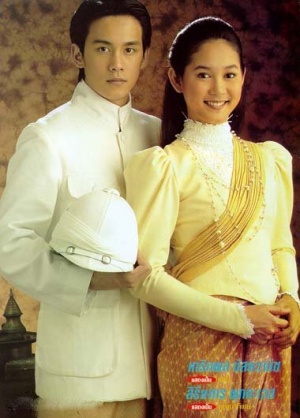 Kaew is a servant in Namthip’s house. Before this time the king made this law that at this certain year any servant born at this certain year will be set free when they reach 21. Kaew is a servant that qualifies for this. Namthip’s dad doesn’t like this rule. Kaew wants to become a like official for the king. So he travels across the lake/river to this other Khun’s house and he helps Kaew by teaching him law and stuff. Namthip’s father and the other Khun doesn’t get along. When he gets caught he gets flogged and at certain time his mother does also. His father was flogged to death when he was younger. Namthip and Kaew like each other but in the status in life that they are at they can’t see each other in that sense.

When Kaew was caught the third time I think he was put in jail and Namthip went to him and she finally let him know what she felt for him. Her father wanted to get rid of him so he sent this guy to kill Kaew. This girl that likes Kaew; Bunjerm helped him and got him free. But they were wanted cause they killed some men along the way. So anyway he went to live with this old women that liked him but soon left. When he came back he became a monk. He was able to see his mother before she took her last breathe.

Meanwhile Namthip’s cousin; Manote who was supposed to marry her was bothering Namthip a lot. He went to stay with this other old man who was a relative of the Khun across the river. One day Namthip heard that Kaew died and she wanted to kill herself too but she needed to make sure. So she went across the river to ask and he lied to her and Kaew was there and heard the whole thing. Kaew went to her just before she could actually kill herself. They confessed their love. He left so that he can make a better name for himself.

At this time Namthip’s dad’s rank was taken from him and he became ill. Manote took this to his advantage and tried to take advantage of Namthip but Fluke was there to save her. Manote tried once again and kidnapped Namthip and tried to sleep with her but once again she was saved by Fluke. Manote killed himself and Kaew returned to make a better name for himself and years passed.

One day there were some visitors to visit Namthip and her family. It was the Khun across the river, he was there to introduce them to the newest Khun’s… [could be wrong about his rank I don’t remember but I know that Namthip’s father respects it] He also informed her dad that he got his job back and asked for her hand in marriage for Fluke. Her dad just laughed. Next we see was an elderly couple coming out of a car and we could tell that it was Kaew and Namthip at an olden age coming to say thanks to the Khun from across the river. Cause he was one important person in them being together and the status Kaew is at today.