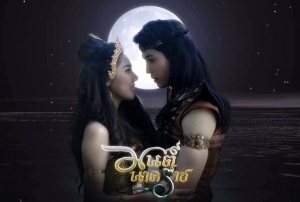 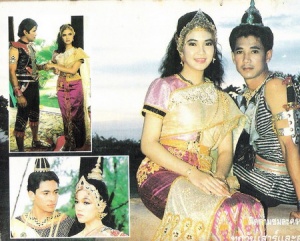 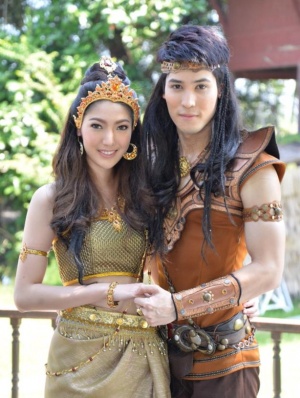 Hiran Graisri is an evil man who wants to become the superior one. Knowing well that a princess by the name of Apsorn Sawan from another Kingdom had in possession, a powerful and magical serpent statue. He went to her kingdom to get her hand in marriage wanting to also possess this powerful statue. Apsorn Sawan's parents were afraid of Hiran Graisri because he was a purely evil and powerful man in the land. Hiran Graisri gave time for Apsorn Sawan to think about the proposal, if she refuses to marry him, he'll create a war between two kingdoms and he returned to his kingdom. Apsorn Sawan later met Ananthan Phuchong, a prince from another kingdom. Unlike Hiran Graisri, Ananthan Phuchong was a man of virtue, a purely charming and generous man. Thus Apsorn Sawan fell in love with him and they married.

Darawadee (fair skin), the older sister and Niwana (darker skin), the younger sister were born to Ananthan Phuchong and Absonsuwan. At birth, they were each granted a magic sphere and were able to transform into serpents. Hiran Graisri wanted the spheres so he kidnapped the daughters, but got caught in the process which resulted in only capturing Niwana. Niwana was bullied as a child by his wife and her daughter, Chasuda, therefore, Hiran taught Niwana how to defend herself. On the other hand, Apsorn Sawan also feared that Hiran Graisri will return to either hurt or else kidnap Darawadee like Niwana so she allowed Darawadee to learn how to defend herself. As time passed by, both sisters learn the art of magic and fighting skills. As Niwana got older, she was manipulated in returning home to go against her family. On her way, she met the kind and generous pra'ek Chai Siri. When she returned home, things weren't as sweet and welcoming like her biological family were expecting. Niwana held so much hatred towards her family, especially jealousy towards her older twin sister Darawadee who won the heart of Chai Siri and was favored/loved the most by her parents. Despite the love Chai Siri has for Darawadee, Niwana secretly loves and helps him when he's in trouble, disguising herself when rescuing him.