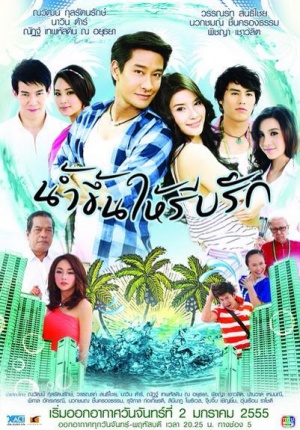 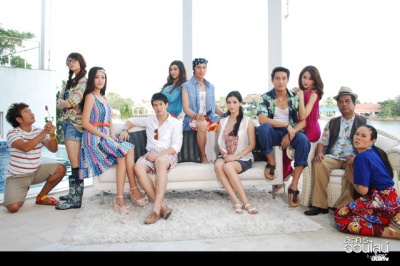 This is a short summary of the synopsis (without the spoilers) translated by Punrungpundao. The full synopsis with the spoiler is available in Thai here at Pong's Facebook fanpage.

During the great flood of 2011 in Thailand, it caused much trouble to anyone even Kor(Pong), who is a playboy and a pub owner. He has become a flood victim as well and has to evacuate and run away from his creditors by trying to get help from Kla, his father in Rayong. But he is surprised, he doesn't find his father. There is a young woman name Wun(View Wannarot), who claims to be the person that takes care of his father. She told him that Kla disappeared and after that Kor quarrels with him over the phone. Kor opens his father's safe to get money to pay off his debt, but there is no money. There is only paperwork that specify that his father gave all of his money to Wun and that if he wants the money, he must marry Wun.

There is much disorder and more fun when Yuan, Kor's creditor, takes his family to escape the flood to live with Kor and Baby, Kor's sweetheart, also escapes the flood to find Kor. Plus, Kor must find his missing father. From [1]