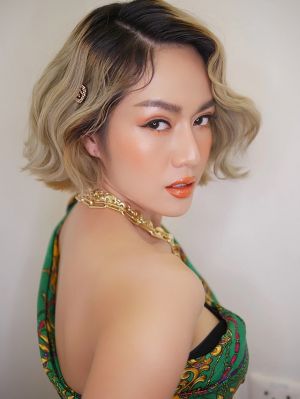 Napassorn Phuthonjai (New) or New The Star was born on January 24, 1983 with his domicile in San Pa Tong District. Chiang Mai Province Received the 3rd runner-up position in the program "The Star, Search Fah, Grab the Star Year 1", graduated from high school from Dara College and a bachelor's degree from the Faculty of Humanities and Social Sciences in Japanese language, Chiang Mai Rajabhat University.

which while studying also worked is a singer in a pub called The Cottage. One day, New saw the announcement of applicants for the singing contest The Star, search for the sky, grab the stars for the 1st time, so New decided to invite Jiew The Star or Piyanuch Suejong. Pru Jiew came to apply, and that was the first step for the two of them on the stage of The Star in showing their singing talent and friendship of friends. that the two have each other She is currently in a relationship with Premanat Suwananon , DJ 91.5 hot wave and MC under GMM Grammy, and the couple got married on November 1, 2017. It was a traditional ceremony. Lanna by having a wedding at the woman's hometown in Chiang Mai Province [1] [2]and the wedding ceremony on December 4, 2017, held at GMM Live House [3]

New is a singer with a unique and powerful voice, able to sing in a variety of genres such as pop , R&B , jazz , dance , hip-hop , rock and roll, etc. Her outstanding talent. Relying on vocal, drag, dodging, voicing, chorus, whistling, New uses the whistle in Loving You up to G6, improvise and pull. unique mic Her inspiration was Beyonce , Christina Aguilera and Alicia Keys , the new mellow width 3.4 octave (Eb3 - G6).

Throughout the contest, she has songs that have been sung and has been admired for many songs, such as, Someday Must Be Good, Miss You Everywhere...Alone, Savannah Orders Her Girlfriend, Not Giving Up Hope, Loving You and Letting Her Dream

She is currently a pop/R&B singer under GMM Grammy's duet with Jiew the Star, and is also the owner of the hit song "Tear Man"