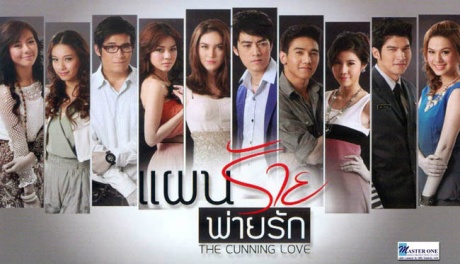 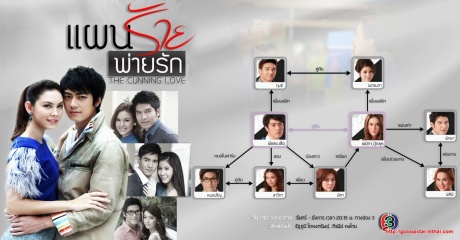 She gets hired by Saengsuda. Her job is to destroy the love of Phisaeng, Saengsuda’s only son who has gone to work in a farm, and to bring him back to manage the airline company. This is the beginning of the fun because of course, Phisaeng and Seua, the one guy whom Kemmik never wants to meet again in this life, are the same person.Film as Phisaeng/Seua, an heir to an airline company who does farming, and Matt as Kemmik who was hired to drag him back and manage the company. Film said that his character is the quiet type and that he doesn’t have many comedic scenes. Got Jirayu as Konthee and Esther as Naetnipha. They will be the bickering pair. He wants to flirts with Kemmik, but Naetnipha won’t allow him to. Woot Surinthorn and Gale Waytaka. He plays Phitya, a womanizer, and she plays Phisinee, the sweetest girl.

Two new faces, Alex Thiradaet and Tubtim Phichamon. He plays Dr. Prin, a vet working at Phisaeng’s farm. He lacks confidence and is more comfortable around pigs than around people. Tubtim plays Sawika, Phisaeng’s fiancée, but he doesn’t love her so she falls for the vet instead. credit Natsume @AF

N'ek with evil plan-trick p'ek to love her but really fell in love with him. p'ek know n'ek have evil plan, and tell himself don't fall for her. he always kept his eyes on her, don't trust her. he plan to get back at her too. but the more they are close he can't help falling in love with her. she want to tell him the truth but can't bare it if he doesn't love her anymore. there is no eternity love between them. love alone is not enough. when the truth comes out, hurt is not enough to explain, shatter is what will happen, love can't even safe it.

P'ek- "Pee-sang" country boy- own a farm in the country. the first time he saw n'ek, he know right away she has a evil plans. it's obvious she's lying doesn't have good intentions like she saids. but when she refuse to tell the truth, he will play along with her games, give her a taste of her own evil medicines.

N'ek-"Kem-ma-mick" city girl- believe there is no true love in this world cause of the things she has face, her plan to show that guys are unfaithful, doesn't care if other people see her as evil. she go in as the third hand to show that guys are unfaithful. but noone knows that really she's like other girls who want to meet true love too. sound like n'ek went to work with p'ek cause it mention she has to catch pigs in the farm.

It's so sad cause they both love eachother, and they know it can't happen and have to separate one day. so their love is painful. the author talks about p'ek feeling about n'ek which make my eyes watery...

"He doesn't think love can be this powerful, even though he tried to deny it and tell himself not to care about Kem-ma-mick but the more he tried to deny it, the more he can't stop loving this girl, the only girl that he can love and when know he can't love her anymore, nothing is important again, the right thing and suites is... get to love her, get to hug her in his arms, protect her, take care of her with his love."

Synopsis 3: Love can not be proven by a game, love is proven by sincerity. Her special talent is to charm men into falling in love with her. She is like a love tester, if you want to know if your boyfriend is sincere and won’t stray, you request her services. Mostly she does this for her friends. Full time, she is a flight attendant. When her boss learns of her talents, she is hired to seduce her boss’s son from his wayward girlfriend and bankrupt his pig farm in order for him to come work for the airline full time. She is given 3 million baht for the job. Credit: Lyn's Lakorn Blog

<You have to watch this drama it is so hilarious. When You watch this you will surely fall in love with the characters and the pairing of Matt & Film. This drama was really good and gave me a huge laugh. I purposely missed school just to watch this drama. This drama will make you laugh and cry at some point. Keemick you will fall in lot with her character, and be kind of annoyed by her personality, but that's what make it funny because if she dodnt have those personality it wouldn't make the drama funny, and laughable. Thats how the drama is so funny because of the characters that they're playing, and the people they chased to pair in here are the perfect one. YOU MUST WATCH THIS LAKORN>