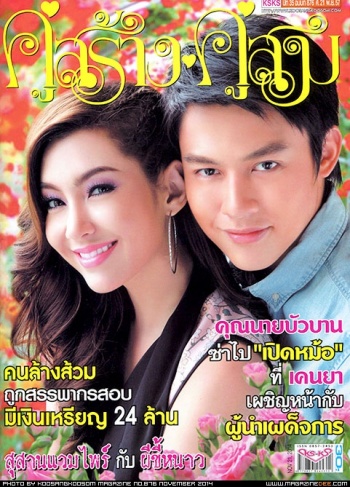 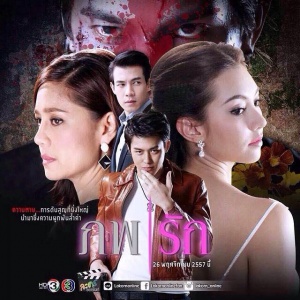 Naamrin (Bella), a bratty and hi-so girl is about to marry her fiance, Popetorn (Nat), whom she grew up with because her mother, Thara (Nok) raised him since he was a little boy after his father had passed away. However, after trying on her wedding dress, Naamrin is challenged to a road race that escalates to a road rage, resulting in the death of both drivers. Yeeo (Mark) is a police officer that happened to be bicycling pass the scene and hears the call on his police radio. He gets to the scene and watches paramedics pull out Naamrin's road rival, whose car had plunged into the nearby lake. He then meets the spirit, Naamrin, who doesn't know that she's dead. Yeeo picks up a necklace that parted from her during the wreck and tucks it into his pocket. Since then, Naamrin's spirit becomes attached to Yeeo and he is the only one that can see her, apart from Yeeo's blind grandmother who can sense her presence but is unaware that Naamrin is a spirit. Thus, Yeeo and his grandmother are the only humans that can speak to Naamrin. Since her fate brought them together, Naamrin believes that Yeeo is the only one that can help her. When they both found out that she's a spirit, she begs for his help and annoys him everyday requesting him to do many things for her, even getting her new clothes. LOL. They gradually fall in love but both deny their feelings to each other when confronted by one another. Also in the picture, we have Nam (Prang), Yeeo's ex-girlfriend, who rejoins the police force after her studies abroad; even though it is unclear whether the two broke up or not, Nam still have feelings for Yeeo, whereas he only sees her as a friend. Yet, their interactions makes Naamrin believe that the two are in love and will marry soon. Day to day, Naamrin not only spends lots of time with Yeeo but also spends a lot of time trying to remember her identity and as much as possible that has to do with her life so Yeeo can help her find out who she really is. Naamrin wishes and is confident that she will be able to reunite with her body. At the same time, she also has to escape from the ghost of the driver who she had gotten into a wreck with. Naamrin doesn't remember how she killed him or if she really did but begins to sense that she probably was a factor of his death. Yeeo doesn't believe that and luckily for Naamrin, Yeeo also has capabilities to help her escape from the ghost as well because her spirit is again, attached to him so when Yeeo calls for her, she has to appear beside him. With the ghost of the driver, their growing love, and the limited time Naamrin has to reunite with her body, there is also the pair of traitors, Popetorn, Naamrin's fiance, and Nubdao (Pear), Naamrin's best friend, who are secret lovers who wishes for Naamrin and her mother, Thara to die so they can take over their resort business. With all the drama, Naamrin's journey to reunite with her body is a difficult and emotional one.