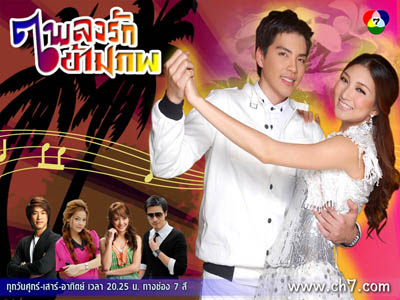 Nokyoong is the only daughter of Nuan a former dancer for a famous Looktoong singer who has passed away. Nuan then decides to get remarried. Once her daughter failed to get into the school of choice Nuan decides to send Nokyoong to live with her former music group. Instructor Tin the leader of the group accepts Nokyoong as a singer in the group and takes her to compete in many shows on tv. Maprang, who is Instructor Tin’s daughter bullies Nokyoong until one day Nokyoong is sad and runs off to the back of the house. She sings a song to express her sadness underneath a Plumeria tree that is about to die and suddenly there is a miracle. The Plumeria tree start to have beautiful flowers bloom once again. On top of that she meets a young man who comes out and talk to her and encourage her before dissapearing into the Plumeria tree. Once Nokyoong places the Plumeria flower behind her ears it is stuck there and the ghost of the guy, “Narm Tarng” is stuck talking to her and on top of that is a ghost who lost his memory and cannot find his way home. It is the day of the competition and Nokyoong is tricked into a bathroom and locked in there, but luckily “Narm Tarng” helps her out of the bathroom is Nokyoong is able to make it and win everyone’s heart over with her song. Paytai accepts Nokyoong into his record label as a singer and she must practice to compete against a super hot singer with Narm Tarng as her help. Nokyoong repays Narm Tarng back by researching his background and finding out that he is a rich owner the “Green” hotel. Narm Tarng’s memory resurface and he remembers Nong Tam his younger sister who is paralyzed due to a car accident. Narm Tarng asks Nokyoong to take him to Mootha’s house a young hi-so woman and the woman in his heart. Coincidentally Paythai is Mootha’s friend The competition has come around for the third time, but there is an incident. Nong Tam has been kidnapped by Mak. Nokyoong goes looking for her with the help of Mai who is Narm Tarng’s best friend that secretly loves Nong Tam. The two helps Nong Tam and Narm Tarng is thankful to her and secretly kisse’s her on the forehead while she is past out. Nokyoong finds out that the person who killed Narm Tarng is Motha and Mak who was secretly dating and killed Narm Tarng in hopes of taking over his hotel chain so they divised a plan to kill Narm Tarng and his sister Nong Tam. Narm Tarng doesn’t believe her causing Nokyoong to be upset. Nong Tam finds out about the Plumeria tree and goes to find it, but Motha and Mak follows her and attempts to hurt her, but Nokyoong goes to help her in time causing the two to be arrested. Narm Tarng uses all of his strength to give Nokyoong the strength to compete in the final round. Nokyoong sings the song with the love that she has for the man in the Plumeria tree and wins beautifully. But Narm Tarng dissapears and the Plumeria tree dies. Nokyoong is very sad and is unable to sing anymore for many months. After that there is a person who has come to buy Instructor Tin’s house and that person is Nong Tam who is able to walk now and has thrown a party inviting Nokyoong to sing. At that moment there is that one man from the Plumeria tree. Nokyoong heart sinks in reality the man in the tree wasn’t Narm Tarng’s Ghost, but was his spirit that was unable to return to it’s body after getting into an accident. Mai had taken his body to recover and be cured by a professional doctor. Mai knew that there was someone who had bad intentions towards Narm Tarng so he kept it a secret.

Nam Tang was being chased and shot at on a motorcycle by people hired to kill him. He loses them but loses control and crashes into that Plumeria tree. He is left for dead by people who saw him. While his body is taken by the police/hospital people, the body is stolen from the vehicle and it is missing for a good chunk of the lakorn. Nam Tang does not die, he is in a coma. His spirit wakes up without any memory at all. He tries to talk to people but no one would answer him back since no one can see him. He comes across Nokyoong who had just failed her exams and tries to talk to her. Coincidentally his questions were answered by her (she was talking to herself at that time) so he decides to follow her.

Nokyoong is forced to study things she is unable to learn by her stepfather. She fails everything in school. However she is a very good singer. Her mother would like to support her since her blood father was also a famous singer that passed away on stage due to being an alcoholic. After failing her exams she is beaten by the stepfather again and then locked in her room. At this point while she is being locked up, Nam Tang suddenly reveals himself in her room. He has no idea about anything. It was just that he suddenly is visible at night. The mom stages her escape and he helps her escape while he acts as a decoy to the stepfather.

She does not know he is a ghost at this point. They both however wonder why everything goes through him. She just thinks he has some sort of powers or is a magician of some sort. Nokyoong joins the singing band set by her mother. Almost everyone in there abuses her. She lives in the kitchen in there house. Tin refuses to help Nokyoong in everyway and bans her from singing in his house. This is due to jealousy and hate he has for her father that he believes stole his song to make himself famous. Each time she is deeply sadden she would go out to the Plumeria tree to sing.

Nokyoong eventually finds out that Nam Tang is only a spirit. A spirit of someone that is not yet dead, but in a coma. She agrees to help him find his body. In the process Nam Tang helps her achieve her dream in becoming a singer. Slowly Nam Tang's spirit would weaken as his body starts to die. Nokyoong would sing each time to boost his energy so he can come back to see her. One day she was very sad so she composed a new song and sang it at night at the tree. Tin (drunk that night) hears this song and writes down the lyrics believing heaven gave him this song. The lakorn plays out more as he assumes ownership of writing that song. Mai eventually ask her to sing some songs on a cd to help wake up Nam Tang's body. Mai keeps asking her to go in person to sing for his friend but NamTang's spirit keeps preventing her from going. At this point Namtang's spirit already likes her and is jealous of her seeing other guys. The spirit is also able to touch things now. He wants her to sing only to him. The songs from the cd helped his body move but not wake up. She is forced not to sing that song anymore so eventually she asks for the cd back. At this point, the body starts to die more and more. It eventually flat lines and the spirit disappears. At this point the two main characters are completely in love. Mai tries a last time to get her to sing to him before his body dies, but circumstances prevented her of getting there on time. They must now find a way to create a miracle and get him to breath again...

The body is obviously reawakened from the dead (still in the hospital room). He wakes up but with no memories of what went on while he was a spirit. NamTang's friends/enemies/workers throws a party for the return of there boss. Nokyoong is asked by Mai and Namtang to sing during the event. While she sings her duet song, he joins in and sings his part. Everyone is confused and he also doesn't know why he knows the lyrics either. Many events and people he bumps into points to him being another person. He sets out to find out why people acts as if they know him while he has no recollection of anything.

Many more events happens throughout the movie, I just cut them out to give you the direct protagonist story. Nokyoong's story is she joins something like American Idol and competes through the whole lakorn. NamTang's story is he and his sister owns a 5 star hotel. The evil people does everything to gain ownership for there own. My synopsis is from me watching and owning this lakorn.