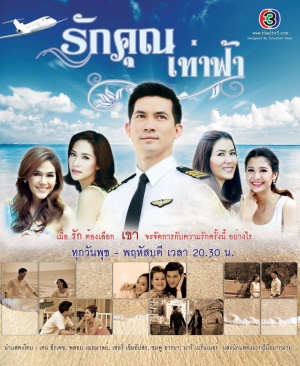 Whenever Teera does not have a flight scheduled, he would go visit his mother everyday to check in on how she is doing to the point where it became a routine. On the surface, his relationship with Pim seems to be going along just fine. However, Pim begins to see problems the closer they are to the wedding when suddenly, Jinda says she is not ready for her son to get married and start a family. Teera insists on getting married since everything has already been prepared. Jinda begins to worry that her son might love his new wife more than he does her. Thus, she plans to destroy her son's wedding by faking illness causing Teera to rush over to his mother's side at the hospital. Poj, Pim's father, is very upset. He tells Pim to break up with Teera. However, Sunee, Pim's mother, is still supporting Teera. Pim refuses to give up and tries to show her father that it really was an emergency. Once the second wedding rolls around, Jinda fakes her illness once again. Pim is starting to be certain that everything that has happened is due to the fact that Jinda does not want Teera to get married with her.Pim tells Teera that his mother has been faking her illness but he does not believe her, thinking that Pim is just upset about his mother messing up their wedding. Pim tells him to set the date for their third wedding. Once their wedding rolls around again, Jinda has to go to the hospital as predicted. Teera begins to believe Pim that his mother is just trying to ruin the wedding. However, Daeng calls and tells him that Jinda really is ill and is in a terrible condition. He calls off the wedding and rushes over to the hospital. This time, the doctor tells him that his mother has diabetes and went into shock due to high blood sugar.Teera tells Pim that his mother is actually sick but Pim does not believe him. She is certain that Jinda simply cannot let her son go. She gives Teera an ultimatum--choose her or his mother. Teera tells her that he cannot do that. He loves her and his mother as well. Pim decides to break up with Teera herself and walks away.

Teera was hearbroken for a long while before he meets Oom (Cherry). Oom is a new flight attendant that just started work recently. Teera meets her on a flight out of the country. Oom's cheerfulness is able to make Teera forgets about the sadness with Pim. He begins seeing her and has feelings for her. He wants to get married with Oom so he takes her to see his mother, hoping that she would like Oom just as he does. However, Jinda tells him that she does not like Oom. She goes as far as using Kitty (Joy), Teera's ex-girlfriend, as a tool by telling her that Teera still has feelings for her. Kitty dreams of restarting her relationships with Teera once again. But in the end, Teera turns her down honestly. Kitty refuses to give up and plans to break Teera and Oom up by telling Oom that she is pregnant with Teera's child. Oom believes her and breaks up with Teera, causing him to be curious about her reason.

In the end, he finds out Kitty is the one screwing up his love life, not to mention that she threatened to hurt Oom too. He calls the police and has them deal with Kitty. Teera proposes to Oom once again. Both her father and mother supports her decision of getting married to Teera. But now, the obstacle is Teera's mother. She refuses to let him get married and go ask for Oom's hand in marriage from her parents. Even when Oom's parents come to speak to Jinda, she is rude to them. In the end, Oom painfully decides to break up with Teera. She believes that getting married while his mother does not agree with will only lead to unhappiness. This causes Teera to be heartbroken once again.

Teera was sad for a long time before he meets Khaotoo (Chompoo). Khaotoo is a flight attendant like Pim but she is her junior. She had a crush on Teera the first time she met him. Unfortunately, Teera was with Oom at the time. The two did not meet for almost a year until their next flight together. Khaotoo begins to start her relationship with Teera once she finds out that he is now single.Khaotoo knows how to please Teera. She knows his likes and dislikes. So it is not difficult for Teera to fall in love with her. But because this, Jinda hates her even more than previous women Teera was with. She does not hide this fact either and openly shows her dislike of Khaotoo. However, Khaotoo is the type that does not back down to anyone. She regularly has verbal arguments with Jinda and shows no respects. At first, Teera is upset with her for not letting his mother gets her way. But Khaotoo does not care and even criticizes Jinda on how unreasonable and illogical she is.

Teera cannot deny the things Khatoo said and begins to agree with her. He goes to his mother, asking her to try and get along with Khaotoo. Jinda is very angry that her son thinks some other woman is better than her. She tells him to leave and go spend his life with Khaotoo and stop paying any attention to her.Teera goes to his friends for advice. They think that some distance from his mother will do her good. This way, she will start getting less attached to him. Teera begins to visit his mother less and spends more time with Khaotoo. However, Jinda tells her maid to call and tell Teera is that she is ill. Once Teera arrives, he sees that she is fine and was just faking like she had before. Teera begins to get tired of this situation and when the maid calls him again, he decides to not go see his mother. Jinda is sadden and disappointed in her son so much that she dumps it all on the maid. The maid can no longer take the abuse so she quits. Whenever Teera drops by for a visit, she tells him that she can look after herself. Over time, she acts haughty to him so much that he begins visiting her less and less.

Teera and Khaotoo are very happy together. Teera eventually feels that Khaotoo is 'the one' and wants to marry her. He goes over to his mother's house to tell her the news but finds Jinda unconscious with smells of urine and feces. He rushes his mother to the hospital. The doctor tells him that her blood sugar is so high that she went into a coma and could have lost her life. Fortunately, the doctor is able to save her just in time. Teera blames himself for being the reason his mother almost die.Jinda wakes up and sees Teera next to her bed. Even though she is happy, she gives him the silent treatment. Noodee,the nurse at the ward, becomes the messenger for the mother and son.

Teera visits his mother everyday with Noodee being the messenger for the two. Eventually, the situation becomes too funny for them. Noodee convinces Jinda to finally speak to Teera herself. Noodee is the nurse that every patient loves, including Jinda. She was the one who took care of Jinda on the first day at the hospital. Jinda often tells her stories about Teera to the point where Noodee thinks she knows him just as well as Jinda does. Once Jinda is discharged from the hospital, Teera moves back in with her. Khaotoo disagrees with this causing a huge fight to break between the two.She tells him to choose between her or his mother. Teera chooses his mother.

This time around, however, Jinda is much more ill and weaker than before. She can no longer do anything herself. Teera contacted Noodee, wanting to hire her to be his mother's nurse. Noodee cannot accept the job since she has to work regular hours at the hospital. Daeng, his older sister, cannot help out either since she has her own family to look after. Teera tries and tries again to find someone to look after her but no one is able to stay for long. Teera ends up being the one who has get her medications, get food, give her baths, feed her, washes her after using the bathroom, and everything else. His daily life consists of him taking care of his mother that there is no trace of the great Captain left in him. Even though looking after his mother is so chaotic, but deep down, he is happy that he gets to repay his mother for bringing him up. Since when he was a child, he was the one being looked after by her. Jinda falls seriously ill once again and has to stay in the hospital before passing away.

Teera feels as if the world went dark for a while.Pim, Oom, and Khaotoo hear the news of Teera's mother passing away. The three come to the funeral and pay their respects (yet feel relief deep down inside) The three tell Teera that they're still in love with him and are waiting for him still. In the end, who will be the woman that Teera decides to spend the rest of his life with?