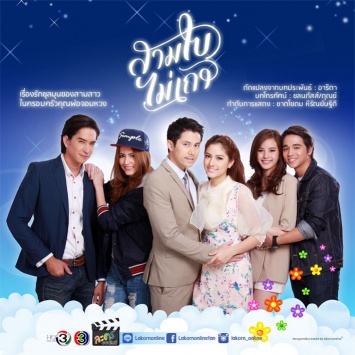 The story follows a warm and loving family- as seen in the above photo – albeit with a strict father. There is nothing more in life that he loves more than to freeze the moments with his daughters and keep them where he wants them. Perhaps due to his possessive and interfering parental ways, his three daughters are anything but under his firm control.

Meet Konwasa (Nychaa), the eldest daughter who recently finished her studies abroad and is groomed to take on the family business. The problem is, Konwasa is independent and prefers to be successful on her own terms and opts to work for an International interior designing company rather than working for her old man’s renown construction firm. This bugs Papa Bear to no end. But wait ‘til he finds out the bigger secret that she’s hiding from him. Konwasa married her sweetheart Sang (Alex) while living in San Francisco, but because he hasn’t established himself nor come from an established family, she feels that her father would not accept him. Once the two returned to Thailand, she asked him to keep their marriage a secret – let’s tell everyone we’re friends! – until he opens his own restaurant and make her proud enough to introduce him to her family.

Second daughter is Anthra (Ice), who feels more comfortable in jeans and a flannel, not to mention, works as a private eye for women who suspects their spouses are cheating on them. Naturally, this has turned her into a man hater – or maybe she has always been a man hater (we don’t know) – so her mission in life is to reveal men for their true colors. She relented that there are good men out there – but it’s few and far in between – and she’s not holding her breath. But the next person she is paid to investigate Vieth (Louis) will put her judging ways to the test, will she actually meet a one-woman kind of man?

The youngest daughter is Intuorn (Pream) who wants everyone to get along, and doesn’t want to rock the boat. She loses sleep on whether she would disappoint her father in any way. Her dream is to be a ballerina – she has calluses and bloody toes to prove it – but even after getting into a ballet institution in America, she fears that her father would not approve. To top it off, she crushes on a man whom she refers to as uncle Sith (Smart) (they’re not related- she met him since she was a little girl) and he had been the one to carry her in his arms and danced with her. He also introduced her to her favorite classical music. It is too bad he’s more than ten years her age, it is too bad he is already married, and it is too bad he’s her father’s friend, or is it? He is a rich socialite who had an arranged marriage with a woman who is the worse match for him. He has been unhappy ever since.

One of life’s biggest challenge as a parent is learning to let go. As much as we want to freeze time or shrink our little one in our pockets, they will grow up and have their own lives. We will watch Asada (the father) (Kob) tested with this challenge and see how his perfect family life unravels before his eyes. Will he learn to let go or will he push his daughters even further due to his stubborn, controlling ways?