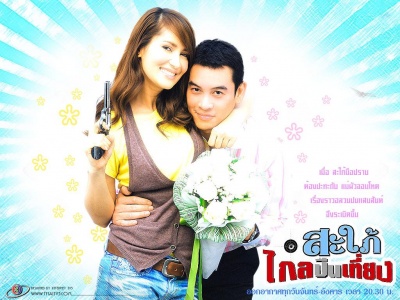 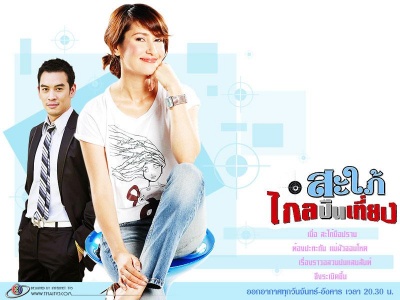 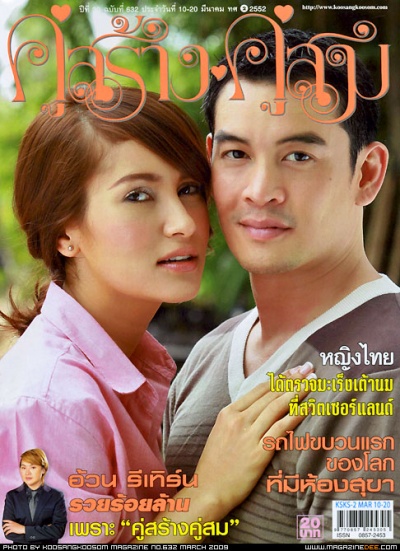 In “Sapai Glai Peun Tiang (Underdeveloped Daughter-in-law)”, Anne is a hot-heated cop in the Crime Suppression Division in Bangkok, her name is Lalin. Her family lives in Roi Et province. When she returns home to participate in a festival, she learns her seamstress sister Areeya (Jane Jensuda) was impregnated by guy from Bangkok. The family and especially Lalin wants this wannabe deadbeat daddy to take responsibility for his actions. The only problem, they don’t know who he is. Areeya refuses to disclose his identity.

The thing is this, Areeya (Jane Jensuda) has already asked the father of her child to take responsibility and even begged his mother for assistance. What she received was embarrassment, the future paternal grandmother to her child insulted her and refused to let her son take responsibility for Areeya’s baby. From that point on, Areeya decides to give up on the matter.

Getting no information from her sister, Lalin secretly ransacked through her sister’s belongings and finds evidence that a guy named Jormtup (Chakrit Yamnam) might be the father. Lalin angrily drives to Bangkok to confront Jormtup, a hotel heir. She rudely interrupts his conference and demanded he take responsibility for impregnating her sister. Jormtup is a little baffled, he didn’t impregnate anyone. They argue for a bit until Jormtup ordered hotel security guards to drag her away.

Later that night, he tells his no-good, playboy older brother Jormphon (Num Gunchai) that some weird abrasive woman charged into his hotel conference and accused him of being the father of her sister’s baby. Jormtup finds this amusing while Jormphon is a little worried, he confides to his younger brother that he is the culprit, the baby daddy. Being a good guy, he tells his older brother he will keep this secret if Jormphon reforms and starts helping him out at the hotel.

For several days and weeks, Lalin causes hell for Jormtup (Charit Yamnam) at work and personally in order to convince him to come back with her to Roi Et. He doesn’t do anything.

One day, Lalin meets up with Khun Ying Lerlak ( Jintara Sugapat), JJormtup and Jormphon’s mother, a very conceited Hi-So woman. Lalin begs for her assistance, Khun Ying Lerlak rudely refuses and insulted her. The thought of having one her son’s marry a country bumpkin was beyond her. Jormtup overhears their conversations and knows he must resolve this issue where both parties are satisfied.

He runs after Lalin after she talked to his mother and offered her money. Yes, he will take responsibility for Areeya, but only financially. This is the best he can do, he tells her. Infuriated, Lalin doesn’t accept his offer. She later decides to resolve the issue, caveman style, she drugs and beats Jormtup up and takes him back to Roi Et. HAHA. GOOD TIMES!

She introduces Jormtup to her sister and Opps! Wrong guy. Feeling bad for mistakingly causing hell to the wrong guy, Lalin sincerely apologizes to Jormtup. He was fine with it. He wasn’t angry at all, her boldness and craziness intrigued him. The more he met her the more he liked her. How can a woman be so cute and yet so vexing at the same time, he thought to himself.

Still wanting revenge for the people who dishonored her sister’s reputation, she decides to drug Jormtup and set up a scene to make it seem like they had “relations”. Lalin tells Jormtup he must take responsibility for her, he gleefully accepts. He was like “Okay” in a giddy manner, he likes her, so it wasn’t a big problem.