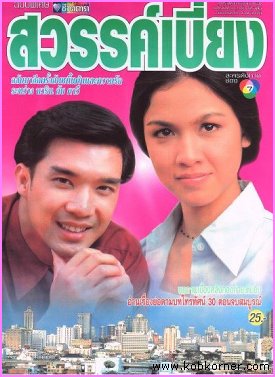 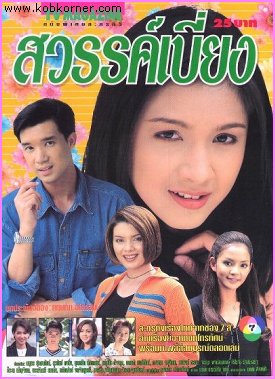 Leela (Kob's sister) and Jade are lovers who have to work hard in order to find a secure life together when they are married. Unfortunately, their dream is destroyed like a nightmare. Five days before their marriage, Leela and Jade have a big car accident. Jade died instantly. Leela is injured and has to be in the hospital. The other party is Mr. Kid Worawat (Brook's Dad), a very rich businessman. He has a minor injury while his wife had died from this car accident as well as Jade. Mr. Kid feels very sorry about this accident. He just takes a very good care of Leela. Since both of them are in the same situation (losing their love ones), they get to know each other very fast. That leads to the sudden marriage between a man in his 50's and a woman in her late 20's. The person who is shocked and very upset is Khavee (Brook), the only son of Mr. Kid. Khavee lost his mom since he was young and was spoiled by his dad. He always attacks his dad's new wife (who had died from the car accident). He's just feel happy for a moment after the death of his dad's wife until he finds out that his dad is going to marry a woman who is about the same age as him. He used to know Leela. Leela used to like him, but he didn't like her because Leela is from a poor society. He is so sure that Leela marries his dad because of money and wants to be in the rich society. __HIDER__

<hide> After the marriage, Leela comes to live in the mansion along with her mom, her younger sister, Narin (Kob) who have her own dignity and her teen younger brother. This makes Khavee really mad. He becomes an enemy with Leela and her family, including his own dad. He always attacks this family when he has a chance. This make Mr. Kid very depressed and get sick. One day, Khavee has a terrible fight with his dad about Leela. His dad is having a heart attack and passed away. Everybody feel very sorry. Khavee thinks that Leela is the main reason why his dad died while Leela thinks that Khavee was the one who killed his dad. After Khavee finds out that his dad's will give him and Leela equal amount of the heritage, he is very suffering and disappointed. He starts to have a plan to revenge Leela and her family. He wants them to be ashamed in the society. However, everybody just ignores him and leaves him alone. That makes him getting crazier. One night, Leela and her mom have to leave the house to visit her sick brother in another providence. Narin is at home by herself while her brother is still at school. Khavee uses his stronger force to rape Narin (who is innocent from the war between Khavee and her sister). She cannot help herself. After Khavee raped her, he just says destroys her feeling by saying that she doesn't worth anything for him to marry her. Narin is very angry and frustate about Khavee's rude action. She doesn't want to face him anymore. She promises to herself that she will do anything to give Khavee back his own medicine (even more than he did to her). She leaves the mansion without telling anyone that Khavee raped her. She lives by herself and ignore all the other guys who want to marry her. She doesn't ask for help from anyone even she has to work harder in order to survive. She does all this just to make Khavee feels guilty for what he did to her. She wants him to feel the pain that she used to have. Khavee tries to find where Narin lives. After that night, Khavee cannot forget how terrible he did to Narin. That feeling is getting worse when he finds out that Narin is pregnant. He starts to see the bad things that he did in the past. He now knows what is his real feeling about Narin. He tries everything to make Narin forgives him. He follows Narin everywhere with a hope that Narin will marry him. Narin, however, doesn't care about his offerings at all. She was hurt too much in the past. She doesn't want to forgive him easily. Finally after Khavee proves that he loves her so much and willing to marry her, Narin starts to forgive him. Now Khavee and Narin understand each other and learn to live together again, along with their son. The End