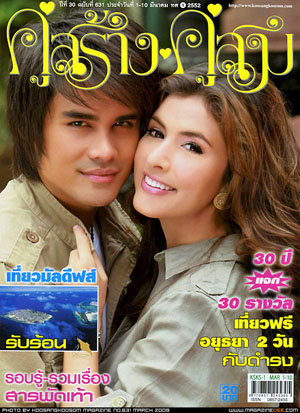 Cast names appear in the order as shown in the show's opening.

A trademarked Necklace...it tells the story of the cruelness of Pootesuan the ruler of Pootesuan City. The wealthy regime in the past, but wealthiness cannot make Pootesuan Regime live forever. Everything falls apart and deteoriates in time. But The necklace that came along with a curse that regardless of who it falls to that person will have seeminly bad fortune hit them; if they don’t die a violent death then they will die a torcherous death because of greed of wanting the treasures of Pootesuan. After many bad incidences causing people to kill one another the necklace with the trademark then disappears with the body of Pootesuan who is cursed to disappear with the woman who is his love. Until 5,000 years later in the deep forest in the middle of the mountains Terdnarong a young man who is intrigued with achaelogy and risky adventures of searching for treasures accepts the job of finding a ancient script. Terdnarong and Jutar travels into the forest in search of the ancient script and finds the necklace with the trademark...in the first flash of seeing the trademarked necklace Terdnarong appears to be stuck in a certain strength that pulls him into picking it up without knowing that evilness has been given birth and Pootesuan is given life once again.

Ninpatra Graironchit and Gratae returns from their volunteer physician mission with organization for the country bringing Nappasoon her father who is proficient in archaeology to rest. Because Terdnarong brings the trademarked necklace to show Noppasoon, Ninpatra starts to have bad dreams and starts to behave oddly unknowingly. Ninpatra meets Terdnarong her past love the vision of Terdnarong left their engagement ceremony to find treasures...once the conversation arises the two says hurtful things towards one another even though deep within they still love one another.

Terdnarong and Juta has a skillful fight with Galjak a mysterious man who has powers and physical strength above normal humans who had invaded in to pressure Terdnarong to tell him where the Trademarked Necklace is. Terdnarong fears that Ninpatra is in danger. Gratae feels the pressence of a certain power or force that is messing with and control Ninpatra. Akkee a mysterious wealthy man who came along with luck appears with Matanai and attempts to get close to Noppasoon and Ninpatra and says that Ninpatra is being controlled by the necklace. The only way to rid of it is Ninpatra must travel to Potetwet Regime alone, but Terdnarong doesn’t trust it and tries to stop her.

This causes the force of the necklace to take possession of Ninpatra all the time. This causes Akee to change his plan and take everyone to Pootesuan Regime. Nittaypin the concubine of Pootesuan in the former lifetime is upset that Akee gives Ninpatra special attention. Noppasoon invites Pran Kaew a hunter who is very skilled in magic to join the team without Nipatra knowing, but they are caught . Ninpatra dreams of the curse and comes face to face with a demon who is the caretaker of the forbidden city and he orders Ninpatra and her team to leave immediately or else everyone will Die. Gratae believes that it is foreshadow of bad events to come and tells the Team about it but no one believes it and a young girl is hypnotized to steal the sheet rock with the map and hide it but Pran Kaew is able to destruct the hypnosis and find the sheet rock. Akee knows right away that this is not the works of an average ghost and is a particular person who wants to prevent his work. On the way Ninpatra and Terdnarong is an arguing pair the entire time. Everyone meets difficulties and hardships that is above scientific explanation but it causes Terdnarong and Ninpatra to become closer and more be tied with affection even more. Akee attempts to do good to tie Ninpatra’s heart, but it doesn’t work because Ninpatra still loves Terdnarong. Akee is angry and attempts to split the two from one another.

The exploring group meets Cheewin a businessman who likes to travel into the forest and hunt. Cheewin has set up his own team with Pran Dam the nemesis of Pran Kaew to follow the team of Noppasoon, but is then hypnotized by Akee and ordered to kill everyone in Noppasoon’s team except Ninpatra. Matanai uses magic to cause Noppasoon’s team pass a dangerous path and experience filth eating spirits, male filth eating spirit and skeletal remains until they fall beneath the earth. Akee falls into the hill for helping Ninpatra and everyone believes that Akee is dead. Ninpatra feels bad towards Akee because before dying Akee admitted his love for her and that he is willing to die for her. Mataenai is unable to stand the painful picture between Akee and Ninpatra and reveals her true self that she is Nititapin the queen who protects the king of Pootesuan Regime and she imprisons Terdanrong so that he is stuck beneath the earth and encounters the green lion, giant snakes, and skeleton corpse.

Nipatra encounters Galjak the god of death. The dream that has been telling Ninpatra to return home but never succeeds. Everyone reaches the front of burial ground and encounters the army of monster that Akee had sent while everyone is slipping Galjak helps them in time. Causing the army of ghosts sent by Akee to retreat. The truth is that Galjak is the friend and close soldier of Pootesuan the husband of Ninpat the girl who is his love. Galjak is then forced to give the wife he loves to his friend. Ninpat is satisfied that her beauty makes men fight over her. Galjak is unable to withstand it and kills Pootesuan and Ninpat and then kills himself to trap the evil spirit of the two beneath the sheet rock.

Nittaypin appears and tells them that Pootesuan is close to coming back to life and he wants to take Ninpatra to sacrifice so that Ninpat will awake once more. Galjak attempts to interfere and stop the plan to give Ninpat life again from succeeding and tells everyone to hurry and leave because it’s close to the time that his body will disappear. Galjak then entrusts Terdnarong to take care of Ninpatra and he is happy that in this life time she has met someone good like Terdnarong. After that Galjak disappears before a huge earthquake occurs along with the appearance of Pootesuan everyone is shocked to find that Pootesuan is actually Akee. He tells everyone that everything was his plan so that everyone will travel there and so that Ninpatra will travel to him so that he can awake Ninpat the woman he loves from her 5,000 years of sleep and rule along side him forever. Everyone has just found out about Pootesuan’s deep plan, but it appears that everything is too late. Pootesuan gives Ninpat life once more.. Will Ninpat remember Pootesuan? What will Terdnarong do if he loses the person he loves forever. Terdnarong is able to use his life as a bargain, what will Ninpatra do?