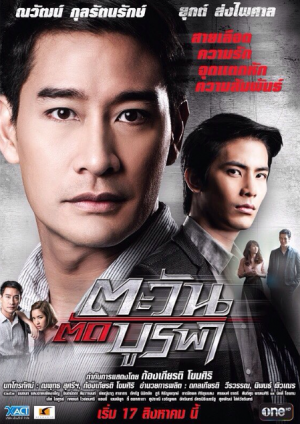 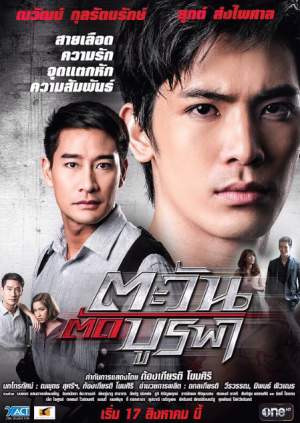 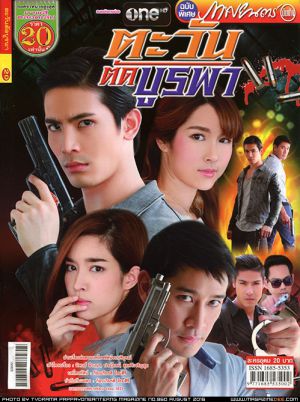 Tawan and Burapa are brothers, and the sons of a well known cop. They are very close. Burapa is into boxing, while Tawan wants to follow in their father’s footsteps to become a cop. They had just come out of the shower and were joking around, when they heard a gun shot and went to see what was going on. They witnessed a murder and when it came time to point the finger at the killer, Tawan was not hesitant to do the right thing. Burapa knew that the bad guys would not leave their family alone if Tawan locked one of them up, therefore he begged Tawan not to be a witness. Tawan’s cop instinct knew that he had to lock the man up, thus the conflict began.

Their father’s birthday was coming up and Tawan had planned to tell his family that he did indeed want to become a cop as well. During their party, just as their father was about to blow out the candles, he spotted one of the gunmen outside of their gate and yelled for his family to take cover, leading the gunmen to advance. They came inside and opened fire at the family. Burapa was about to get shot, but his mother jumped in front of him and took the bullet. She died in his arms. After stabbing and wounding their father, the rivals left. Burapa, filled with rage, picked up a gun and headed out on a motorcycle after the men who had shot their mother. When he reached them, he shot them to death. Tawan had followed his brother and was in deep shock as he stepped into the scene. For a few moments, the brothers just stood there and stared at each other, as if they were locked in that moment. Finally, Burapa knew that he must get out of the scene before the cops arrived. He rushed to his motorcycle, but Tawan would not let him go and took the key away from his brother. Burapa begged his brother to give him the key, but Tawan’s cop nature kicked in and he refused to do so. He threw away the key, as the sound of sirens filled the air.

When the hearing finally took place, Burapa was sentenced to five years in prison. Burapa blamed his brother for putting him there in the first place. If Tawan had just listened to him about not testifying against the enemies, none of this would've ever happened. In prison, Burapa befriended some people who were involved in the mafia. There was a mafia leader that was particularly interested in Burapa, therefore they developed a close friendship.

Tawan felt responsible for his actions so for the next four years, he joined the police force and worked really hard to get his way to the top. He wrote to Burapa everyday, but Burapa never replied to any of his letters. He didn’t even read them. Instead, he threw them into a box. Burapa was initiated into the mafia and Tawan was now assigned to another police force and was working very hard, as well as taking care of his paralyzed father. Four years had passed and Burapa was doing really well in prison, so they decided to put him into a work release program. He was going to be released pretty soon. Tawan and his father were really happy when they read this. Burapa and his cellmates were working on a plumbing system next to an art gallery and as Tawan glanced over, he saw a painting of a house and it gave him some comfort thinking about his family. Tawan's friend made a few joking comments, so Tawan pretended to punch his friend. As they inched backwards they ran into a group of women. As Burapa glanced up, he saw a beautiful young woman, Preecha, who was the owner of the art gallery. Intrigued by one another, they continued to stare until they both made their way to their work areas.

Tawan was doing a great job at work also. One night while he and his coworkers were out to relax, they heard a woman yell out “Robber!” They chased after the robber. Tawan was the first to get to the robber and as he flipped her around, he realized that the robber was actually a young woman by the name of Joe. He looked at her, surprised. Joe begged him to let her go and said that her life was in his hands now. This brought him back to the night when Burapa had said the same thing as he begged Twan to give him the key. Feeling sorry for Joe, Tawan let Joe go just as his men arrived. He told them that the robber had escaped, but dropped the purse. As Tawan left with his men, Joe came out from her hiding spot and looked at Tawan admiringly.

Burapa was now released from prison, but he didn’t want to go home to his brother and father, so he ditched them, who were waiting eagerly in front. He and his friend went off to find a job and ended up working at a bar owned by an old friend of the mafia leader Burapa had met in prison. They received the job after almost reaching their death. Burapa went out with one of the employees and saw someone moving artworks. The woman dropped her artwork so Burapa went to go help. They both reached down to grab the artwork and accidentally grabbed one another’s hand. The woman looked over the painting and Tawan smiled because they'd met before. The woman was Preecha; she thanked Tawan. When his coworker came back he tried flirting with Preecha. She rejected his advances so Burapa tried protecting her. He and his coworker eventually got into a fight and they ended up at the police station. Everything was cleared, but Burapa’s boss held a grudge against him.

When Burapa came out of the building, Tawan was going in and recognized his brother. He turned around and called out Burapa’s name. Burapa made a run for it. Tawan went after him and after a few heated words, Burapa punched Tawan. Tawan’s friend who was with him, tried to arrest Burapa, but Tawan ordered him to release Burapa and so, Burapa left. Preecha came and Tawan explained the situation.

Tawan and Burapa deal with feud after feud to the point where Tawan vowed that he would put Burapa behind bars with his own two hands. Burapa, at this time, was in the mafia officially and was one of the right hand men of the leader. Burapa and Preecha also developed a romance. Joe had developed feelings for Tawan and was helping him out, finding information on Burapa. Tawan does everything to try to make his brother a better person. Burapa loves his brother, but hasn't forgiven him for what he did. One day, Tawan had to go undercover and his cover was blown so the bad guys were playing a game where they each got three shots at Tawan. Burapa volunteered to play too, since he didn’t want them to kill his brother. Burapa had one left and he purposely missed. He'd shot Tawan, but not where he can get badly injured. After it was over, Burapa went to check on him, and as no one was looking he dropped his cell phone on Tawan. Another bad guy of a different mafia group was hiding inside the buildings and saw this, thus he became curious about Tawan and Burapa’s relationship.

Burapa was going to be named the new leader of the mafia because the old one was killed. But instead, he decided that it was time for him to go. He went to get Preecha and they were going to go to Singapore, and never be heard of from again. Tawan had people guard Preecha for her safety. In disguise, Burapa went up to her apartment and got her. She packed and they were on their way. Tawan had come up and finally realized what had happened and ran down the stairs to catch them. When he did, he and Burapa both pointed a gun to the other’s head. They argued as they made their way to Burapa’s getaway car. The other bad guys were there, and Burapa and Tawan had a back-to-back duel with them. Just as one of them was about to shoot Burapa, Preecha got out of the car and got shot instead.

They took her to a clinic, and then Burapa found a place for them to stay the night while they waited for the ship to Singapore to arrive in the morning. He handcuffed Tawan to a bed and left them there while he went somewhere. At this point, most of Burapa’s mafia have died, as well as some of the officers who'd worked with Tawan. Burapa had gone to get some food, but by the time he returned the bad guys had already found them. They were surrounded. As they were shooting at each other, someone threw some kind of powder at Tawan’s face and he couldn’t see. He told Burapa to go get the car. While Burapa went, Tawan told Preecha exactly how he felt about his brother and how sorry he was. He gave all the evidence that he had on the bad guys to Preecha and sent her off with Burapa, leaving him there to fight off the bad guys by himself. In the car, Preecha was crying. Burapa asked her what was wrong and she showed him the evidence that Tawan had given her. Quickly, he turned the car around and went to help his brother. He arrived just as the bad guys were about to kill his brother. Burapa threw Tawan a gun, and the bad guy hadn’t expected to see Burapa again, so Burapa shot him and they ran to the car and made it to the docks.

They were waiting for a boat, so the brothers talked. Tawan’s speech was heart warming. Burapa told his brother that he'd forgiven him. They hugged, and the remaining bad guy shot them. The bullet hit Burapa on his side and went through to Tawan. Tawan and Burapa went after the bad guy, and succeeded by putting two bullets through his head. They were once again waiting for the boat when the police came with the S.W.A.T. team. They ordered Burapa to give himself up, but he chose death. Tawan begged him to think of their father and Preecha. He didn’t want them to suffer knowing that he was in jail for the rest of his life. Tawan left the car and with tears in his eyes, he shot himself in the car and it blew up.

A couple of weeks passed and Preecha was going somewhere on a boat. As she stood there thinking, she turned around and saw Burapa. They ran into each other’s arms and hugged. When Tawan had shot the car, Burapa had actually jumped into the water. It was Tawan and his plan all along, which indicates that his time Tawan didn’t let his brother down. Tawan also returned home with Joe greeting him as a younger sister. He checked the mail and there was a letter from Burapa and Preecha. There was also a picture of them together. The note simply said thank you and called Tawan “P‘Chai”. He showed it to his father and his father tells him that he did the right thing. They hug. The end.