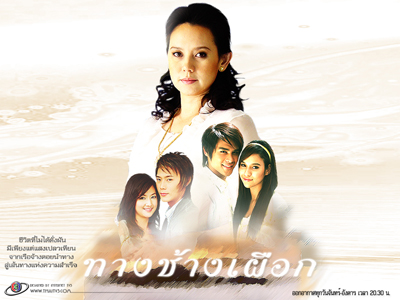 This lakorn starts off with Tah and Tye's parents. Tah and Tye are brothers and they live with their mom, dad, grandma and aunt. However, the mom and the aunt don't get along much. One day the mom goes out to eat. The aunt and her daughter who happen to be shopping sees the mom eating, but she's eating a another man, who's not her brother. She calls her brother immediately to tell him that his wife is cheating on him. When the Tye's mom comes home, Tye's dad confronts her. Tye and Tah secretly are listening to the argument and the mom admits that she is having an affair. Heartbroken, the dad goes into the room and locks it. Next thing you know, a gunshot is heard and everyone rushes to the room. The dad killed himself. Everyone is crying, and the mom ends up leaving.

Tye and Tah are then taken care of by their grandma, who is a principal at a school. Not so long later, Yardthip is brought to the grandma for her to raise because the mother doesn't want Yardthip. She ends up being raised by the grandma as well. As they grow up, Tah is in love with Yardthip, but Yardthip secretly loves Tye. However, because of the incident with his mother, Tye will never love a women because of the hurt his mother caused on his dad.