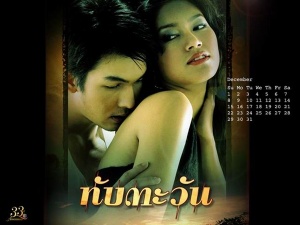 Benz is kind of a woman who likes to sleep around with men because her father does the same with women. She seduces Aum (who is poor and works for her family) and gets pregnant with him. Yet she doesn't let him near her child. Even as a mother she is still back to her old ways and constantly hits her when she is angry.

Benz's (Saenglha) mother drown while trying to leave Benz and her father (Nirut Sirijuny, Boonarnunt). Since her mother's death, Boonanunt became a womanizer. Boonanunt would disregard Benz, blaming the death of his wife on her. In revenge, he would sleep with as many women as he could. He would bring them over to the house, and Benz would see this and slowly she fantasied about it. As she grew up, she saw episodes of her fathers' many nights of intimate scenes. Until one day, Aum Atichart Chumnanon (Nhanmuang ) becomes a gardener at her house. She sees him and immediately was memorized by him. Although, she acted as if she hated him and he was beneath her. Benz seduces Aum, in the wakes of "practicing" intimacy as she'd seen her father does many times. She ends up getting pregnant by him and has a child. The child is a little girl who is deaf and mute. Benz loves her child, but altogether hates the fact that she is deaf and mute. She does not let Aum see the child and does not allow her father, Boonanunt to get near the child. Towards the end, Boonanunt sees what he has become and what he has done to Benz. Her anger, aggression, and feelings towards men is because of his actions. He takes care of his granddaughter due to the mentality of Benz becoming mental and delusional. In the end, Boonanunt apologizes to Benz and she is left with the mental state of never been loved, taken care of, and Aum taking care of her.