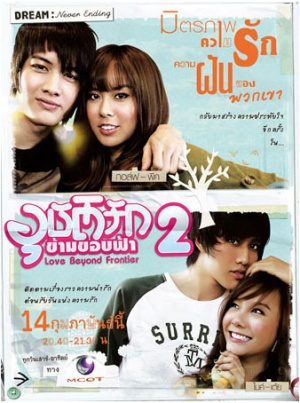 “Love across Frontiers” Part 2 serious went Korean style on our bums–memory lost, crazy love triangles, and Mike suffering from cancer, this is absurdly Korean drama at its best.

I’m assuming a year or 2 have passed, Golf and Pat (Peak) are in a stable relationship and so are Pern (Toey) and Mike. Mike and Golf are now big time singers, who have just released their first album and of course because this is a drama, it’s a major hit. Because of crazy fangirls who don’t want their teen idols to have girlfriends, Golf and Pat have to keep their relationship a secret. Both Pat and Golf are having a hard time dealing with it.

One day, Pat and Golf arrange a get-together at a cafe to sort out their problems, Golf doesn’t come and Pat doesn’t pick up her phone when he calls. As she is leaving the cafe, Pat is hit by a car. Physically, Pat is fine;however, she did receive trauma to the head and is inflicted with temporary- partial amnesia. Pat can remember everyone but GOLF.

In an attempt to recover her memory, he writes her song. When she listens to it, she remembers that she loved him but doesn’t remember the good times they had together, she remembers only the bad moments. Pat breaks up with Golf and returns to her normal life. She later meets March (Yot) and they start dating.

On with Mike…Mike has been getting a lot of headaches and fainting spells, he goes to the hospital for a check up and learns he has brain cancer. Mike hides this from girlfriend Pern (Toey) and she assumes he is seeing someone else because he is being secretive and goes off on his own quite often.

Eventually Pern finds out about the illness and she writes a fairytale story for him. At this point, the gang (Golf, Pern, and Pat) join forces to fold origami paper cranes for Mike because in Japan their is a belief that if you fold 1000 paper cranes for a sick person, their sickness will disappear.

As they spend more time together, Pat realizes that she still loves Golf but is not sure how to proceed. Also, she doesn’t want to hurt March. Her relationship with March is made easier with the appearance of Pern’s young cousin, Oobyid (Mai). Oobyid secretly has a crush on March and slowly March starts to develop feelings for her.