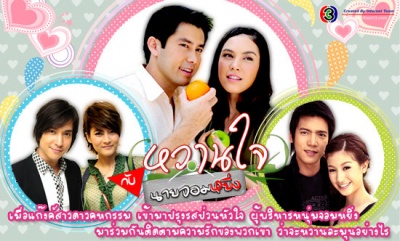 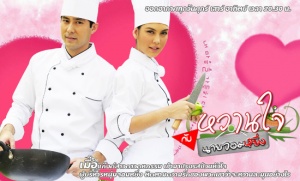 Three cousins: Atsawin (First), Chatwin (Louis) , Thotwin (Mart) are heirs to a 5-star hotel, the Siamtara. Atsawin is a well-mannered businessman, who manages the marketing department for the hotel slash restaurant. He’s a good guy, calm and sincere. His only problem is love–he can’t admit his feelings to the girl he like. That could be a problem.

Chatwin is the playboy of the family, who cares little for work, his likes include women and parties. His mother is pushing him into the family business so that he can inherit the hotel from his grandmother, who is the current president. Chatwin wants to work in Human Resources or Public Relations department, his ambitious mother is against it, she wants him to work in the marketing department or something higher up to get recognition from his grandmother.

Then we have Thotwin, the oldest, a man with a chip on his shoulders. His father committed suicide and he feels like the black sheep in the family. He wants to make it on his own as a cook and prove himself worthy in the family. He’s a cold, serious, stern man.

Now we have our 3 leading ladies, they include Jomjai (Matt), Kun (Mint), and Kaewsai (Margie). All 3 are best friends and classmates at a local university, they are majoring in Home Economics. Jomjai’s specialty is cooking, Kun is decorating and being a florist, Kaewsai is a dessert cook. For their final semester, the girls are sent to Siamtara Hotel for an internship. There, they meet the 3 heirs to the hotel.

Jomjai, the adventurous cook, the rich girl of the group, the fashionable one is paired with Thotwin, the rigid man who becomes her boss. At first, they hated each other, then gradually, they develop feelings for each other.

Kaewsai, the sweetheart, the modest girl, the poor girl in the group, who lives with her grandmother is paired with Chatwin, the playboy. Kaewsai is shy and Chatwin is flamboyant, that whole opposite attract concept at work again. Because of her modest upbringing, she influences Chatwin to be sincere in his work and to have goals in his life. His mother hates her because she is poor.

Kun, the middle class girl, the gifted decorator and florist, the bubbly one, the one oozing with warmth is paired with Atsawin, a man who doesn’t know how to show his true feelings.

The lakorn is about the 3 girls making it through their tough internship and about the 3 heirs dueling it out for the position of president of their family’s company and hotel. Atsawin opted out of being an heir to the hotel, which leaves Chatwin and Thotwin to compete among themselves. Chatwin is aided by Atsawin and Thotwin is on his own.