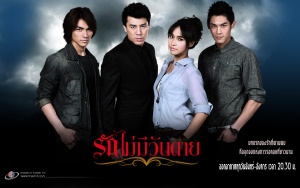 2 gold digging brothers, Prawet and Chit steal 117 pieces of treasure from the Dragon Cave. They both are attacked by blood-sucking bat and they are cursed to be immortal. To remove this curse, they must return all treasures they stole to the cave. Prawet wants to do it, but Chit doesn't agree with his brother. This conflict causes these 2 brothers to be enemies against each other. Later, they both inherit their immortality to their sons.

One day, Chit can kill Prawet by burning him. Traipoom, Prawet's son decides to follow his father's intention by trying to look for the lost treasures and take them back to the cave.

Many hundreds years later, Traipoom have lived his immotal life as normal people. One day, in antiques auction event, he meets Plaichat. There's the reason making them work together and their relationship begin to develop. The more Plaichat stays close to Traipoom, the more she wonders about him because she finds that Traipoom doesn't eat, sleep and live his life different from general people.

Ram, Chit's son and Maya, the girl who falls in love with Ram try to obstruct Traipoom from returning the treasures. Ram meets Plaichat and falls in love with her. Finally, Traipoom can find 116 pieces of treasure. There's only the Dragon knife missing. That knife can help Traipoom be free from immortality. However, Ram wants keep his immortality, so he has to fight with Traipoom over that knife and Plaichat.