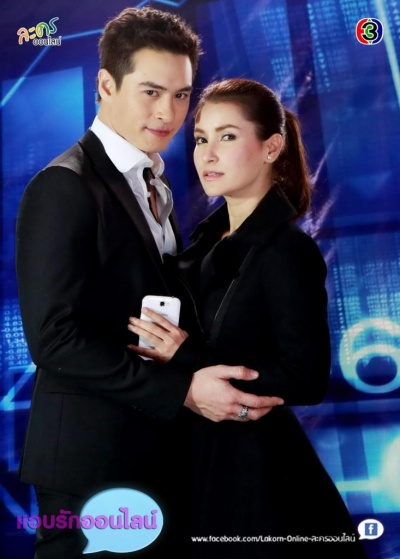 Awatsaya (Anne) is a fierce boss who secretly falls in love with her new young subordinate, Pranont (Mark). Because she needs to maintain her image as a professional and boss she conceals this secret. In order to get to know him better and court him, she uses an online chat program, MSN, using the alias ‘Khun Ab Ruk (Secret Love).'

Their relationship starts to bloom, but is cut short when Awatsaya carelessly reveals her secret to the handsome and cunning Managing Director of the company Lipda (Peter). When Lipda learns of this secret, he tries to help Awatsaya move forward with Pranont. However, he ends up making everything even more troublesome when he secretly falls in love with Awatsaya. The love triangle between Awatsaya, Pranont, and Lipda is unable to end easily when another obstacle like Prip-Praao (Kim) comes into the picture and pretends to be ‘Khun Ab Ruk.'

It all began when Pranont (Mark), a young and handsome 25 year old man, applied for a marketing position at Narapat Estate Company. He was being interviewed by Awatsaya (Anne), the manager of the marketing division. Awatsaya is 30 years old. Due to her strict personality and old-fashioned persona, everyone at the company gave her the nickname of the four-eyed venomous snake since she also wears glasses. This made Pranon very tense and nervous to be interviewed by her. However, what he did not know was that Awatsaya was just as nervous. Although she may look strict and uptight on the outside, her heart was fluttering on the inside as she realized that Pranon was the knight in shining armor that she had been searching for over a year. Pranon had saved her life when she almost got hit by a car a year ago. But Pranon did not remember who she was. Awatsaya, on the other hand, remembers the incident clearly. Having Pranon come work at the same company brought joy to her life each time she saw his face. She was so interested in Pranon that she did not take any interest in Lipda (Peter), the owner of Narapat Estate who has captured the hearts of all the young women throughout the country. To Awatsaya, Lipda was just another playboy who liked to annoy her in every way possible, but what she did not know was that Lipda had secretly fallen in love with her for the past five years, but he was too afraid to tell her.

The situation had gotten even more problematic when Prip-Praao (Kim), a rich, beautiful, and smart young woman, who had graduated with her master's in financing from Boston, came to also apply for a position at the company. She was Pranon's biggest competitor. Lipda had the two competing against each other and Prip-Praao always had the upper hand because she knew more than Pranon in everything. This made Pranon very stressed out, but Awatsaya was always there to help him. This triggered her to dislike Prip-Praao a bit.

Awatsaya would secretly admire Pranon at his desk each day at work. She noticed that he was often sad. Out of concern, she wanted to know what was bothering Pranon so she found a way to speak to him via a chat program under the alias of "Khun Aep Ruk" (Secret Admirer). She found that Pranon had recently gone through a heartbreak. Awatsaya tried her best to be there for him and give him support, knowing that he would never believe that his secret admirer is the same person as his strict and uptight boss.

Pranon wanted to know who the secret admirer he was talking to was. Rut, his close friend and co-worker, thinks that it may be Prip-Praao since she came to work at the company at the same time as Pranon and has a cheerful personality similar to "Khun Aep Ruk." Everyone else was curious to know who the secret admirer was as well. Each time Pranon talked to "Secret Admirer," Prip-Praao would coincidently appear at his front door too.

After competing with Pranon to attract the most clients, Prip-Praao began to like Pranon for his determination, wittiness, and kind heart. She started to fall for him without realizing it. Furthermore, Awatsaya had the chance to meet Pranon's family. This made her fall for him even more after experiencing how loving his family were. Prip-Praao also admired his family because she was raised in a different environment as a child.

Prip-Praao was curious to know who "Secret Admirer" was. So she asked her co-worker to help. In the end, she found out that Awatsaya was "Khun Aep Ruk" because she saw Awatsaya's computer screen. She was sure that Awatsaya was the secret admirer because she would constantly order Pranon to do this and that just so she can get close to him. Also, this was the same reason why Awatsaya would always make her lose face. She was jealous of her and Pranon spending time together. Prip-Praao wanted to get back at Awatsaya by getting even closer to Pranon to make her even more jealous.

Lipda was also beginning to see a change in Awatsaya's behavior. He then realized that Awatsaya was falling for a young man 5 years younger than herself. This made Lipda think of a way to stop the two from happening.

Would Lipda succeed in stealing Awatsaya's heart away from Pranon? Tune into Ab Ruk Online on January 7th to find out!