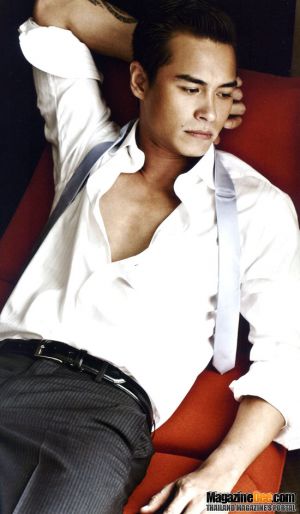 Peter Corp Dyrendal is a Thai Danish singer, recording artist, actor and model, His recording of Goom-Pah-Pun (กุมภาพันธ์) is the theme song for a Thai TV series that was produced in 2004. His recordings have been published by GMM Grammy.

Peter was born in Ishøj, Denmark where he was raised. When he was a child, he often went to Thailand and stayed with his aunt in Bangkok almost every year during vacations.

When Peter was 17 years old, his aunt pushed him to go for a camera test with a modeling agency. The following year, Peter was back in Bangkok and did some modeling jobs which were at that time mostly for fun.

When he was 19, he was invited to the Thai record company GMM Grammy for a test. Later, he signed his contract with GMM Grammy and his debut album ‘Hin Pha Ga Darb’ (1998) that made him a famous singer in Thailand. Peter also went into acting in Thai TV series.

Peter speaks Thai, English, German and Danish. Although since living in Thailand for so long he can't speak the other languages fluently.

Peter was married to public figure Ployphan Taweerat from 2013-2016. They have two sons together nicknamed Panther & Puma.