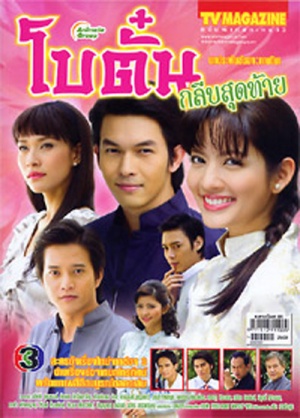 The novel "Botan Gleep Sudtai' by the author "Sampaothong" got the best book award. No one knew who "Sampaothong" was and how he looked like. Everyone just knew that he was a Thai/Chinese writer who was famous in Thailand.

In fact, "Sampaothong" was Theeradej or Ah-Joo, the youngest son of Ah-Cheng and Meiling, a Chinese couple who imigrated from China to settle in Thailand and earned their living by opening a food shop selling "Khao Mun Gai" (Steamed-Chicken with Rice) and "Ped Palo" (Stewed Duck). They had 3 sons, Theerachai or Ah-Jo, Theerachart or Ah-Jiw and Theeradej or Ah-Joo.

Ah-Cheng always thought that having 3 sons was a gift from God because he thought that the sons could carry on his lineage and had more gratefulness than daughter.

However, in his mind, Ah-Joo was his hated child and Ah-Jo and Ah-Jiw were his loved sons because when Ah-Joo was born, his family got a difficulty and had to imigrate to Thailand, so he thought that Ah-Joo was a jinx of his family. So, Ah-Cheng had never cared about his last son and always quarrelled with him.

Ah-Jo got a job in the real estate company and Ah-Jiw got a job in the bank. Ah-Joo wanted to be a writer, so he decided to write the novel for magazines. However, Ah-Joo was glad to know that Ah-Cheng liked to read "Sampaothong"'s novel though his father didn't know he was that author, so he tried to use the novel to communicate with his father's mind.

The story about a Chinese family that had only daughters and had no son to carry on the lineage was the plot that interested Ah-Joo for his new novel that he wanted his father to read. Ah-Chang's family, another family that had emigrated from China, had only 3 daughters, Dala, Panan and Tanyong. They could be his source for his novel, so he decided to apply for a labor job in their "Chang-Sin" Chinese Opera House.

With Ah-Joo's good looks and smart character, it made Tanyong, the youngest daughter distrust him. She thought that he was a spy from another Chinese opera house, so she tried to find fault with him and teased him in many ways to drive him out of her family.