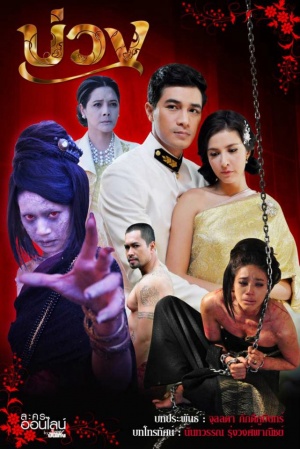 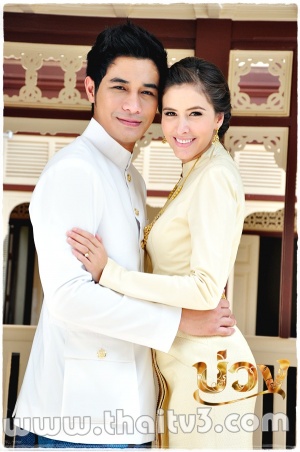 It’s a story about a servant girl who is in love and obsesses about Khun Luang(Rome). She is the servant girl of CheunKlin(Rita) who is the daughter of a high ranked soldier and Paeng(Noon) believes that she is his daughter too since CheunKlin's father slept with her mother who is also a servant but that is never clarified. Khun Luang meets CheunKlin and falls in love instantly then they are married etc. Paeng gets angry and thinks CheunKlin tries to take everything from her so she uses black magic to get Khun Luang to fall in love with her and it works. In the story CheunKlin's mom is very imortant because she is the protector of her present day great great grandchildren. She later locked Paeng up for using black magic on her daughter’s husband and hired someone to put a magic/holy cloth over the door to lock Paeng and her black magic in a small house not too far from their main house. Now in the present time, Khun Luang and CheunKlin are reborn as Samon and Rampa. They are married with two kids. They come back to Thailand to live in their family's old house in which now CheunKlin's mom in past is Samon's great grandmother. Her corpse remains in the house and the Paeng's spirit has become a strong and vengeful ghost but is still trapped in the house. So she tries to first lure the children into the small house but she fails. Then Paeng tries to lure Samon to remove the cloth from the door and set her free. He does eventually remove the cloth and now the evil spirit is free and sets out to destroy the family ... watch what happens next!!