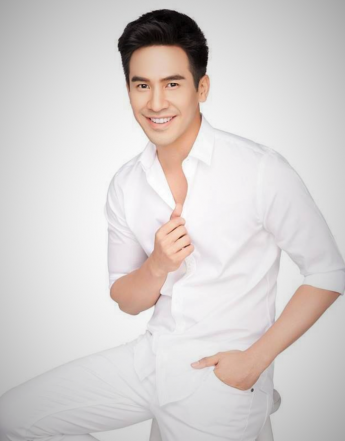 Pope was born on December 27, 1982; to a family with two children, he has one older sister. Pope received an undergraduate degree in Communication Arts and Design from King Mongkut’s Institute of Technology. He worked as a graphic designer prior to pursuing a career in acting, which explains his talent in drawing and passion in teaching arts to students. Pope also teaches children soccer. Shortly after his promising career as a graphic designer, in 2006, Pope decides to audition for a leading role in a drama for channel 9. He won the audition and immediately starts practicing for the role, and resigns from his graphic designing career. Never did he imagine that the dream of being an actor could come to fruition. And never did he imagine the road could be so hard and disappointing.

Two years of hard work and practicing, the project was cancelled. He blames the setback on his unfortunate fate, yet he continues to persevere. Sometime later, Pope earned a minor casting role in the Legend of King Naresuan and was able to put the horse riding and fighting skills to use. The opportunity to play a leading role finally follows as he is casted for the silver screen in October Sonata, supposedly a very good movie but for whatever reason did not resonate with the public at the time.

It was one disappointment after another. Pope could not help but feel discouraged and heartbroken at his waning career. There were many reasons to cry, and he leans on his mother and advisor. Feeling that he needed to fulfill his duty as a son, as well as freeing his mind of his failures, Pope decides to ordain as a monk. He did quite the duration, but it was necessary. Coming out of the monk hood allowed him to let go of the pain and move on.

And good things do happen to people who wait, no matter the pain. Pope was pursued for a role as Nat in the lakorn called Dok Som See Thong, and although he was a minor, supporting actor (a friend of scandalous Reya) his performance was etched in fans’ minds as well as producers alike. He was then signed with channel 3 and featured as another supporting cast in Tawan Duerd as Nai Singh, a rough around the edges character, but so beloved by the fans with his puppy dog eyes and chemistry with Ploykwan. Pope received additional roles thereafter as Dr. Wattana in Game Rai Game Rak, and a playboy in Buang. No matter the role, he is very popular, and amazingly so among his fans eyes even for his non leading roles.