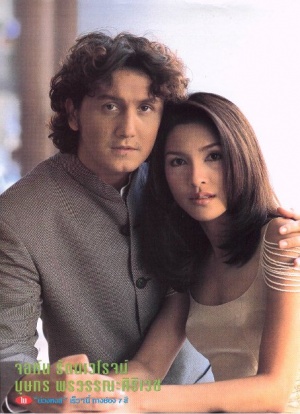 Noi is used to the rich and fancy life. She has a fiance that loves her but mostly for her money. Her father remarried a younger women who once used to be Noi's friend. Noi was an actress that was well-known. But soon her father died and she lost everything. Her finace left her cause she had no money and she was kicked out of her own house by her step-mother. She was lost in the famous world.

John owned a line of hotels and was well-loved by the people that lived in that community. He had a best friend that was a cop. There is a company that is rivals with john's hotels. They wanted to get rid of John and they hired Noi to use her beauty to destroy him. They wanted her to get these papers that could destroy them that John had on them. She went and John was hypnotized by her beauty. They started to go out and he fell for her and she almost succeeded with what she was hired to do but John was to smart for her. He was crushed that she never really was interested in him.

She had no money left and she had no money to pay for the room that she was staying in. John was not a friend anymore cause she had betrayed him so she tried to barrow some money so that she could get on a plane back home. But he laughed in her face coldly said no. He came up with the idea that the only way that she can work off the debts that she owed the hotel was for her to work there. So her world was turned upside down instead of the one that was being served she was the one that was serving

John had never stopped liking her but he treated her no different than his other employees. But when he was by himself he thought of her. While working her debt off many incidents occurred. she was a misfit from the other and no one really wanted to hang with her. She acted stuck up to the other and she was harassed by many men that came into the restaurants. Her step-mother also came. She gave John the wrong impression of Noi. he thought that Noi was a trouble person. Noi always showed hatred towards her step-mother. Though her step-mother acted that she cared for Noi in front of others but behind their back she was very bitchy to Noi. She also wanted to get rid of Noi. She had this old geezer take her up to his room and he tried to rape her but Noi escaped on time.

Noi was furious with John thinking that he was the one that did this too her. She knew that John was on her step-mother's side so she thought that they had joined forces to make her life miserable. John did not express it to Noi but he was furious also and when she was calmed he went to the old geezer and punched him a few times. As time went by Noi became loved by those that worked with her. John was also realizes that she was not as cold-hearted as she seem. She also saw his kindness towards her. But he put on a hard face when she was around. John also found out the true face of Noi's step-mother. Noi also got an apology from her step-mother but her step-mother struck again but John handled it. In the end John and Noi were married after they both realized where their hearts were.