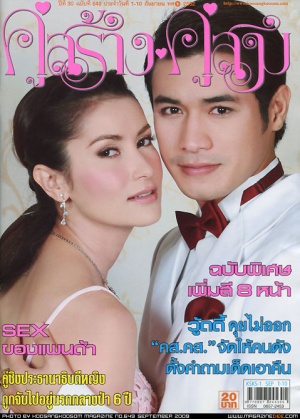 Rome is a trained soldier who gets captured by Ann brother her name is Princess Alisa in this lakorn. They hate each other, Alisa has full control over Rome by her brother's permission. Rome is a prisoner near the palace, he lives in a house by himself. Princess Alisa is nice to him but he hates her and her brother. Rome has a girlfriend whom he loves very much name Pirumya who has no idea where he is. One night there is a party in the palace and Princess Alisa was asked to dance with Rome, they dance but she is far from him and doesn't hold his hand tightly, he tells her that they need to be closer to make it convincing or is she ashame to be with him. They dance closer. Other things happen that makes them like each other more. There is a royal person who likes Alisa but he has a lot of girls. One time Pirumya (Rome's girlfriend in the story comes to visit) she at this point hates Rome cuz he didn't keep his promise to her and blame him that if she marries someone else then it is not her fault. She marries this playboy guy. Later on he treats her like shit because he truly loves Princess Alisa. Alisa does not love him so he kidnaps her. He takes her to his little hiding place and the action begins. Everyone doesn't know where she is, the only person that can save her is Rome. Rome at this time has better relationship with Ann's brother. He goes with the little kid who loves both Rome and Ann. They go into the wood to try to find Ann. The bad guy is so secretive that not even his wife knows where she is except Pirumya. She tries to help Ann but is beaten. She later kills herself and regretted what she did and tried to go back to Rome but he didn't love her anymore. The bad guy tried to rape Ann many times but never succeed because there was always people coming into the room to interrupt. Anyways later on Rome rescue Ann, and they fought with the bad guys with guns, during one time Ann almost got shot so Rome grab her and they fell on each other. He fell on top of her. Later the kid who followed them die cuz he was sick because they were in the woods for a very long time. Later Ann went to take a swim in the lake and Rome came back from somewhere and wanted to talk to her, he came just in time when Ann was taking her clothes off, he saw her naked, but she didn't see him. Later he acts uncomfortable around her and she doesn't know why. They later went to a house and the couples there called Rome and Ann husband and wife and Rome said they were. They liked each other more and more. Later everyone got better the bad guy got what he deserve, for the reward Rome was freed by Ann's brother. At the end Ann asked him if he would return and he said that he will return cuz his heart is here. He left and Ann waited but no answer from him. Later a servant brought her a bouquet of flower from someone. Ann thought it was Rome cuz she heard the noise of a horse outside(they ride horses alot in this lakorn) but when she went out there was no one there so she felt said and turn her back and was gonna go back until she heard a noise and looked back and saw Rome, they ran to hugged each other, spoke. The end

…by Anne Thongprasom and Dom Hetrakul in the lakorn “Chaloey Sak (Honorable captive or Prideful prisoner)” for 1 year to be tortured and humiliated. Isn’t that nice?

In this series, ‘Rome’ Patchada Nampan plays Lieutenant Yothin Warat, a war hero from WWII, he was recognized for his involvement in the Free Thai movement during the war. Lieutenant Yothin has a bright future ahead of him and is engage to Piromya (Joy Rinlanee), the daughter of a high government official. Things turn bad for Lieutenant Youthin when his father Phraya Sawamipak Warat encounter financial problems in his ship sailing (Navy) business.

With Phraya Sawamipak’s navy business in shambles, it allowed Alisa and Atisak to act and inflict revenge on Phraya Sawamipak by taking his son Yothin captive. But wait, because this is a lakorn, something unexpected happen, as Alisa and Lieutenant Yothin spend more time together, they start to fall in love. I’ll just leave it at that.