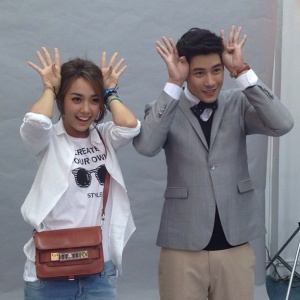 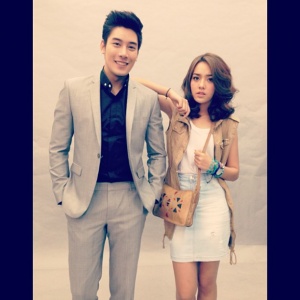 Darika (Namtarn) is the granddaughter of a funeral director. She is a strong hearted and independent young woman who seeks money as her main refuge. Fate just so happens to have her stumbling head over heels when she meets Prajan, a successful man of perfect background and qualities. We find ourselves here again as we return for part two of Dao Kien Duen.

The story begins with Darika, a 23 year old woman whose grandfather is a funeral director. Thuwaiwanjak Phuttan, Darika’s best friend, has to go on a business trip for her job. She asked her to look after her condo. Darika does not hesitate and agrees because this is the only time in her life where she gets to stay in a luxurious place compared to her low monthly rented room that she had rented out since she attended college. In addition, the condo is close to her work place which is even more convenient for her. She can save money from traveling expenses and use it for other things. Darika really loves her job because she gets paid well. It makes her happy to be able to fend for herself and not rely on a man.

Darika doesn’t take interest in men because she’s afraid that she will experience a failed marriage like her mother’s. Her mother isn’t a very good person because 30 years ago, she fell in love with a police officer and eloped with him, leaving her father to be heartbroken in embarrassment. After a while, his true colors showed and he began to cheat on her. Her mother couldn’t take it anymore and decided to divorce him. She returned back to her father carrying Darika along with her.

Darika grew up poor. Her house is made from wood taken from a casket. This resulted in her not having any friends come over because they’re afraid of ghosts. However, this optimistic young girl is not ashamed but instead proud of her home. She thinks it’s unique and very chic in design. Her poor status taught Darika the value of money ever since she was little.

Darika spent a couple days at the condo then had to go back to Warang. Her boss is busy preparing for the 50th anniversary since the company’s opening. Mom Luang Chankaan Thatsanai (Ken) is the head leader. He’s a young man of high status who has graduated with his master’s degree from Harvard at only 26 years of age. He’s the beloved child of Khun Dararai, a reputable and well known person in society. Chan Thatsanai is a charming and famous businessman. Chan is a very formal person who cares a lot about organization. His clothes has to be arranged by the right shades of color.

His father gave him time to study and learn about the company for 2 years. After that, he has to accept the position after him and look after the family’s business. Darika currently works at his company and they will eventually cross path. How will the rest of the story play out?

This is the special sequel to Dao Kaew Duen where Ken Phupoom plays Mom Luang, the son of Aum & Janie in Dao Kaew Duen, who is a man of few words yet handsome and perfect. Namtarn plays Darika, the hotheaded grand-daughter of an 'Undertaker' who is mischievous and doesn't believe in love. (C. Lyn),