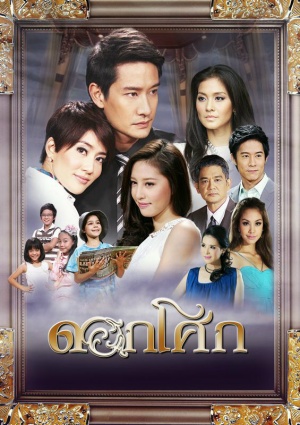 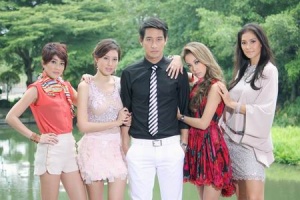 Dork Soke lives with Somjai (her grandmother). She sells newspapers and her important buyer is Ausanai. He always buys her newspapers.

One day, Dork Soke falls down beside Sudkhed's car. He realizes that Dork Soke is his granddaughter. Dork Soke is the daughter of Peeyakamon. Peeyakamon is Sudkhed's daughter with his servant (Dork Soke's grandmother). Sudkhed wants Dork Soke to stay with him, but Somjai doesn't consent.

After Sudkhed's death, Dork Soke decides to return to her grandmother. She then meets Mrs. Bent. When Mrs. Bent sees Dork Soke's necklace, she realizes that Dork Soke is her granddaughter (her son's daughter).

Dork Soke moves to the United states with Mrs .Bent, but she still loves and misses Ausanai. Because of this, Mrs. Bent decides to take Dork Soke back to Thailand......So how will things unfold and who will Ausanai choose?

Somjai is Khun Sudkhet's mistress who was a maid in his house. She has a daughter, Soodjit with him but moves out before the child is merely two or three. Somjai remarries and have two more children, Mai and Pong. As a result, Soodjit must live with her mother and new family. Later, due to her conflict with her step father, who tries to rape her, Soodjit runs away from home to return a few years later with a mixed baby girl. Soodjit leaves her baby with her mother, Somjai and never returned for eighteen something years. Somjai raises her only grand daughter to be a wonderful kid whom she names Dok Soke. Later, Dok Soke meets Assanai, her mother's ex but she does not know that because she's never seen her mother. Shortly afterwards, she runs into her biological grandfather, Khun Chai Sudkhet. Khun Sudkhet pities Dok Soke and take her to go live with him. He introduces her to the people in the house but sadly no one likes her except Aun, her male cousin. Dok Soke has to put up with everyone in the house no matter how mean they are or what they do, she is patient. Dok Soke grew up to be a beautiful and kind hearted young woman. One day, she runs out of patience and returns to go live with her grandmother. Even though her grandmother's family is poor and constantly quarreling, she loves them and feels at home. There is also Assanai, who is always there for Dok Soke. Soon, she and Assanai develop feelings for each other but unfortunately, Soodjit, who is now Preeyakamol comes back into Assanai's life. Of course, Preeyakamol doesn't know Dok Soke is her daughter and vice versa. Later, Dok Soke meets Mrs. Benz, who turns out to be her paternal grandmother from America. Dok Soke finally learns who her father is and soon, she discovers a secret that has been kept for eighteen years...Preeyakamol is actually Soodjit, her biological mother and Assanai's ex!