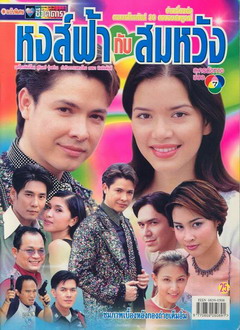 Got is a tailor and a very good one. One day when he delivered a suit, he stumbled on the old man. He ran away frightened because he realized that man was dead. Then he ended up in witness protection where he had to live with the head cop, who is a friend of Aom’s father.

Both of them head off at a bad start because Aom likes to be the one in charge and Got defies her. Since Aom owns a dance theater and Got had to stay with her, she triee to torture him by making sew the costumes. But he agreed happily because he it's an task for him since he is a great tailor.

Not only does Got can tailor, he can also sing very well. One day they needed someone to sing because their head singer quit. So Aom pushed Got on stage and the audience loved him. He began to get publicity which gave the killer knowledge of where he was and they came after him.

Later on, Got fell for Wanasa when he saw her for the first time (not knowing that she was the one behind the murder that he encountered). So he asked Aom about love because he wanted to win Wanasa’s heart. When Aom began to help him, she fell deeper and deeper in love with him. Realizing this, she tried avoiding him but it only got stronger.

Will Aom confess her feelings to Got or will she keeps her feelings in and continue to encourage him to chase after Wanasa's heart? That's for you to find out.

Somwang (Got) and his uncle own and operate a tailor shop. One day, a rich guy comes in with his young wife, Cherdchai (Sa) whom

Somwang mistakens as the rich guy's daughter. The rich guy orders a custom made suit and days later, Somwang delivers it. When

Somwang enters the house, he happens to witness the murder of the rich guy. The murderer,Dan,(Krerk), who is actually Cherdchai's

The next day, a few cops approach and confront Somwang on the murder of the rich guy. One of the cops shows some photos of most

wanted fugitives to Somwang in case he recognizes the murderer. Dan's face happens to be on one of the photos and Somwang

immediately recognizes it. For the sake of his safety, the cops send Somwang into seclusion. Not only that, he also sends a

Somwang ends up living with one of the cop's uncle and cousin, Hongfah(Aom), who owns a dance team and is associated with well

One day, the singer Mingkwan arrives extremely late for a concert. Anxious and desperate, Hongfah pushes Somwang onto the stage

as backup. Even though he was nervous, Somwang performed very well and even a loud applaud from the audience. After a few more

following concerts, Somwang becomes a singer for Hongfah's small company and later gained the attention of a well known record

producer. Somwang is offered a record deal followed by a concert. Mali advises Somwang agree to the concert because if he becomes

famous, he will surely capture the attention of the murderer, Dan.

At this point, Somwang does not know what to do. He really wants to help out Hongfah's company but at the same time, he is scared

to lose his life. On top of all that, he is in love with Cherdchai, whom he still believes is the late rich guy's daughter.

Unbeknownst to him, Hongfah gradually falls in love with Somwang. Love. Danger. Fame. Which woman will capture Somwang's heart in

the end? Will Somwang overcome his fear of danger and death? Will Somwang still be famous? Watch Hongfah Gub Somwang to find out!