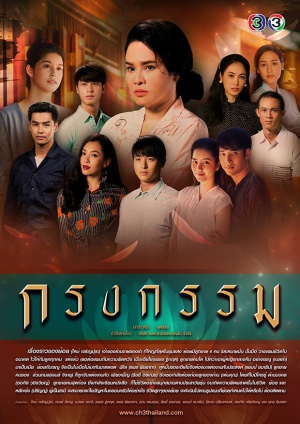 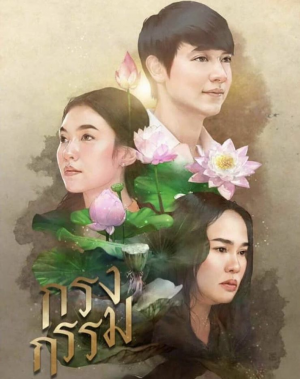 Power of love, Power of anger, Power of feud. Stream of karma brought up people’s lives flowing by reasons of righteousness of each person. Reynu (Bella) a prostitute who meets Pathom (Phet) a man from an upper class status and falls in love with him. Pathom brings her home as a wife but Yoi (Mai), his mother, despises her and they encounter many obstacles. She will do anything to try to get rid of Reynu. Ahsa (James), the 3rd son of the family, has two wives, Piangpen and Junta. He was forced to marry Piangpen but the one he really loves is Junta. Ahsa is the only friendly person to Reynu in the family and they develop a brother and sister relationship.

Nang Yoi Asavarungruengkij: ( Mai) :( Bae Family), about 45 years old, daughter of original farmers but becoming daughter-in-law to a Chinese family, her life is mixed with Thai and Chinese life style. Be diligent on career with her ideology that every single baht is worth with earnings, so have to spend with the most valuable way. Beside selling groceries, she has another business of money to money by having pieces of lands for rental and leasing.

Nang Yoi is the main support of the family, managing family living with the family business system as per Chinese culture and tradition strictly. She is a straight woman, like is to like, hate is to hate expressively. Hard character as beside as a main supporter of the family, she has passed many difficulties, facing many experiences and people so she has confidence in her own attitude.

Reynu: (Bella): 25 years old, educated only grade 4. Obviously pretty as real Thai lady, open-minded, lively, good manner to everyone, sweet and sincere but hardcore at the time of battle sometime.

Having her own dream literally and intending to make her dream come true, seriously doing everything with full effort, obviosly ideology to live on her own legs with her own capability. Grateful, an eye for an eye, a tooth for a tooth, ready to fight in any form, uncomplex attitude. Within the strength, hiding life complex which failure in the past. She failed to sleep with her brother-in-law till getting pragnant to be a boy. She keeps inside her sorrow as cannot tell anyone and her own son call her “sister “ instead of ‘mom’, beside that she was forced by her mom to work as prostitute to get away from poorness.

Her dream is to have family, living as normal as other people, staying with the one she loves, earning on her own honorably.

Kamol /Ahsa: (James) : The third son of Nang Yoi , about 19 years old, after graduated grade 4, he starts to work with his family business, doing everything as per his mom’s order, no complain, no hesitation, good mood guy, having own attitude, ready for any changing and movement that happen, compromise with this world, being middleman between Nang Yoi and those daughters-in-law, good minded guy, having good moral, love to help people sincerely.

Be the son who is the least carable from Nang Yoi, the least beloved but finally he is the closest son and the most taken care to Nang Yoi. Kamol cannot get away from being Nang Yoi ‘s tool to overcome her daughters-in-law without knowledge that the way of her controlling to her son’s life, brought up with the dishonour and hurt her son’s mind to be ashamed. He interest in Juntra when he saw her at the shop and met at the movie theater. His mother doesn't approve of her and she force Ahsa to marry Phiangpen. Phiangpen has no interest in Ahsa because she's in love with Karn (Denkhun) and pregnant with his child. Phiangpen didn't expect Ahsa is caring person and listen to her problems. Ahsa wants her to tell parents the truth and try to work things out with Karn. Although, they both ended their relationship they both respect each other as brother & sister and will always be there for one another.

Private Pathom Aswarungruangkit (Ah Chai): (Phet ) : 22 years old (2-3 years younger than Reynu) the oldest son of Nang Yoi, good looking Chinese guy, stopped to every girl, after ordained he went to be a soldier at Takhli (Air Force). graduated only grade 4, polite, mild, unexperience about karma, his body scents is so good leading women to taste him He is mild, well obey to his parent, responsible as the oldest son but at the same time, be ready to be sensible to a new woman who step in even though his heart is with Reynu

Junta :(Yiiiwha)  : Pretty, bright girl, sweet looks from Lub Lae Town, similar age as Wanna. She is a worker in a shop selling monk- products., she is sweet, polite, less speaker, pretty, Beloved by grandma (Ama) and Mui Nee till they want to support her for better future life. Junta keeps her love with Prasong (during ordaining) secretly but have to be sad as Monk has to quit and marrying with Pilai as per Nang Yoi’s command. The ladyness of Junta causes many guys to fall in love including Kamol, but Kamol has to step back as Palad Jinnakorn is also flirting with her. Junta was so hurt with love as previously she was cheated by a high ranking soldier till she slept with him. Later on she came to know that he has already got a wife. That soldier gave her money to do abortion, she ran away from shame to Chum Saeng Village. And having strong intention not to have any more love throughout her life.

Alek Teeradetch was cast as the male lead playing the third brother, but drop out due to his conflict schedule.