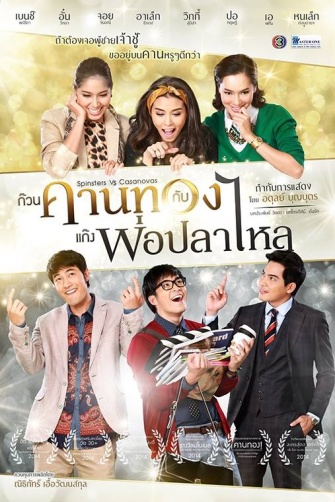 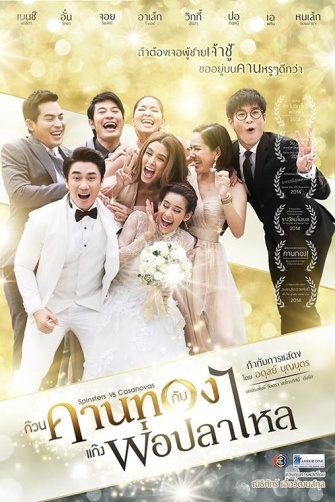 In the case of Spinster versus Casanovas, three 35 year old women – established women mind you – are handed a classic feminine issue, their good friend is getting married and they are still, unequivocally single. This usually doesn’t bother them, until their good friend contrives for all three women to meet face to face after several years since the disbandment of their friendship. Suddenly, the competitiveness, the pain and hurt takes center stage. The three women turn their pain into anger and vow that they will MARRY before the other and in one month no less. It doesn’t matter that they each do not have a boyfriend, it doesn’t matter that the promise came from anger and jealousy.

We have Linee (Benz Pornchita) a man hater who is too smart for her own good. She works for a nonprofit firm that protects women from domestic abuse, trafficking etc. She’s confident and prefers to see men on the judgment table, preferably sued or locked up. There are hints that she must have been hurt in the past and has severe mistrusts in them. So it’s not surprising – but equally engaging – when she meets her match in Wayu (Aun Witaya), owner and operator of a renowned bar/club franchise. She believes they are dishonest and involved with illegal activities. Wayu is attracted to Linee because she is like a book that you can read over and over again. He’s quite intrigued in her. Linee’s greener pasture is to do what she loves, which is protecting women, so she may come off a little strong, but deep down she too wonders if her prejudice in men is causing her to overlook good men too.

Meet Maple (Joy Rinlanee), our resident control freak and rich women. Despite being born with a silver spoon, she’s a capable Editor in Chief for “It’s a Must” magazine. Maple believes that she’s rich, beautiful and single and can have any man she wants. That was her mentality during college and throughout her career. She thinks she has the time to meet her soul mate, until a monkey wrench is thrown into her path. Not only are her once-best-friends tormenting her with a challenge, her granny has engaged her to a gay man – not that granny knew the man is gay. Maple’s perfect world seems to collapse overnight and right in front of her new intern who happens to be 10 years younger than her! The intern, Krisda (Alek Teeradeth) watches her meltdown with good humor. And he seems to always have a handkerchief ready at a moment’s notice. Despite throwing cracks at her about her “old age,” Krisda has quite the old soul.

Finally we have Nampeung (Vicky Sunisa), veteran actress in the entertainment industry. Acting is all she knows. But these days the new actresses are getting younger and younger, and she’s finding it difficult to compete. It also doesn’t help that she has a natural tendency to be jealous and petty. Patience is not one of her virtues. She truly believes that her former best friends were jealous of her beauty and ability to snag a man that they are constantly getting on her case that her college boyfriend is cheating on her. She had severed their friendship because of a man. Come to find, he was cheating on her but Nampeung would go to the grave before letting those nosy ex friends get that final satisfaction. She even vowed to be the first to marry, but because of her personality, she has yet to find a nice man to settle down with. The boss of her talent agency, Peet (Por Thrisadee), catches her eye when she realizes she has overlooked him. Divorced, rich and kind, Nampeung decides he would be her man or so help her god. Watch out for this lady, she has lots of tricks up her sleeves. Out of all of the men in this drama, Peet would have to be the Casanova.

The show does a great job using tropes (and sometimes overused plot devices) into a storyline that works. There is more to the story than a few women trying to find a husband. The show explores the anxiety behind the feeling that some women may go through upon reaching a certain age: the need for comparison to other women and what they don’t have, the pressure to find someone when your clock is clearly ticking, and above all, living in a modern world with traditional expectations.

I love that the heroines are flawed and dynamic. Through their search for Mr. Right Now, I hope that they find themselves, and mend their friendship. The show understands that there is nothing worse than women hurting women, so seeing that even though the women do things to spite each other, they also have each other’s back when it really matters. I feel badly for Nampeung the most because she is so clueless on how to behave in this ever-changing world, nor differentiate what’s reality and what’s in a drama, since all she knows is the entertainment world. I’m so glad that her ex friends have resurfaced, at least they may challenge her to be better and slap her around a time or two. I also love that we get to live vicariously through three very different women.

I find myself adoring the men in this show, I can see them being a supportive pillar, always there for the ladies but not taking too much of the limelight. It doesn’t hurt that the leads have very good chemistry with each other: Joy-Alek, Benz-Aun and Vicky-Por. So I would be curious to see how the characters overcome their differences (core values and age) and make the relationship work.

It’s a heartwarming show, painting a rosy picture but also realistic enough to capture important themes. Because as much this show is about the journey of love between a man and a woman, it is also about finding peace with yourself (and your age) and mending a broken friendship. The narrative and picture quality will take us right there with the characters.