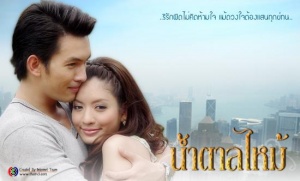 Pawan or Pe (Aum) was the only son of a real estate businessman. After his mother died, his father fell in love and had an affair with a married woman. Later, his father was shot by his lover's husband. So, Pawan had prejudice against married woman.

However, he had a crush on Thuma or Bo (Aff), an interior designer in his company. When he knew that she was a married woman, he tried to stay away from her, but he couldn't resist her charming nature.

Thuma got married with Tao, her brother's friend because her family had some financial problem and Tao volunteered to help her. But after she moved to America with him, she realized that Tao was gay and she had to live in the same house with her husband and his boyfriend. Later, she couldn't bear that situation anymore, so she came back to Thailand and got a job in Pawan's company.

Pawan couldn't resist his desire for her, so he started to ask Thuma out. Thuma was lonely and wanted to have someone, so she dated him. They kept dating, fell in love with each other and had an affair in China. In his mind, he still worried that history would repeat itself. He would get the same fate as his father, but he was in love with Thuma so much that he didn't care about anything.

Pawan met Sathorn, a man who helped him from an attack by a drunk man. Sathorn was in debt and saw that Pawan was very rich, so he tried to introduced Nian (Ploy), his daughter to Pawan. He asked Pawan to accepted Nian to work in his company. He told his daughter to try to seduce Pawan. Pawan accepted Nian to work in his company, but he was not interested in Nian more than just a young pretty girl because he loved Thuma so much. When Nian saw that Pawan was in love and dating Thuma, she was very jealous and wanted to win him.

Pawan told Thuma that he wanted to marry her, so Thuma told him to wait and she would divorce her husband to be with him.

Tao came back to Thailand with Aer, his new boyfriend after he had some trouble in America. His mother was very angry at him and refused to give him money anymore. One day, Aer saw that Thuma was dating Pawan. They feared that Thuma would divorce Tao and Tao's mother would know the truth and be angrier at her son, so Aer told Tao to threaten Pawan to stay away from Thuma. Thuma asked to divorce from Tao but he refused it.

Nian created an evil scheme. She tried to act as an innocent angel and flatter everyone who was close to Pawan, such as Panee, Pawan's aunt and his step-mother, and Pawan's secretary. She tried to get close to Pawan until everyone in company thought that she was dating Pawan and would be his wife in the future. Pawan couldn't refuse her when she asked him to give her a ride home or to work everyday or went out with him because he thought that she was his friend's daughter.

When Pawan's secretary took leave to give birth, Nian was assigned to work as a substitute. Nian kept obstructing Thuma and Pawan from seeing and talking to each other.

After Thuma knew that she was pregnant with Pawan, she was very happy and wanted to tell him, but Nian still kept her from meeting him. Thuma was very hurt and thought that Pawan was bored of her and didn't want to see her anymore. She also heard everybody in the company talking about the relationship between Pawan and Nian. She tried to send messages to make appointments with him, but he didn't get it because of Nian and didn't go to see her. Thuma saw that Pawan went out with Nian instead of going to see her, so she decided to quit her job and go to Hawaii to stay with Tik, her youngest brother. Anyway, Pawan had no chance to see Thuma's resignation letter because Nian threw it away.

Jaengla, Pawan's lawyer friend, worked with Tao's mother and he accidentally knew that Thuma was going to leave for Hawaii, so he told Pawan. Pawan hurried to go and met Thuma at the airport before she left. Thuma was very hurt and told him she was going to leave without returning. Pawan didn't understand anything and thought that she didn't want him anymore, so he let her go.

After Thuma left, Pawan was very sorry. He kept drinking, getting drunk and sleeping around. One day, when Pawan was drunk and Nian took care of him, he thought of Thuma so much and kept raving about her. He thought that Nian was Thuma, so he hugged and kissed her and fell asleep after that. Nian was very angry when she heard Thuma's name and nothing happened as what she wanted. However, the next morning, Pawan woke up naked and saw that Nian was crying. He thought that he raped her. Nian tried to say that it was alright. She didn't care about it.

But later, Nian's father told Pawan that Nian was pregnant with him and forced him to marry his daughter. After marriage, Pawan realized that Nian was a materialistic girl. He was bored of her and quarrelled with her so often. He started going out and sleeping around with a woman in a bar.

In Hawaii, Thuma heard the news that Pawan got married with Nian. She was very hurt. She told Tik, her brother about everything and told him that she wanted to get an abortion, but after she got an accident and felt that the baby in her belly was moving, she changed her mind to keep the baby. She wanted to give birth to her baby in Thailand, so she and Tik decided to go back to Thailand.

Tik was the first guy that Tao used to sleep with, but at that time, Tik told Tao that he couldn't live his life like that with Tao, so they had to separate. Coming back to Thailand this time, they got back their relationship. Tik tried to open Tao's eyes into seeing that Aer was not a good man. Aer was using and pimping him. Tik also told Tao about Thuma's baby with Pawan, a guy she loved, so Tao decided to let Thuma go free and divorce her.

Nian tried to call for attention from Pawan, so she tried to commit suicide. Jaengla, Pawan's friend, could catch that Nian didn't get pregnant and was unable to get pregnant anymore for the rest of her life. He also saw Thuma in the hospital giving birth to a son. He knew that her baby was Pawan's baby, so he told Pawan.

Nian asked for a lot of dowry for divorce from Pawan, and Pawan didn't refuse it. After divorce, Pawan tried to get back with Thuma and asked for her forgiveness.

Thuma didn't want to forgive him easily at first, but for the sake of thier son, she forgave him at last. They lived together happily after that and she got pregnant again.