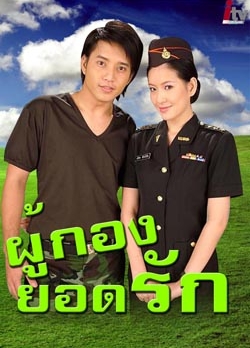 Paan (Tui Kiatkamol) is a lawyer but as he goes back to his hometown, he gets drafted to join the army. Paan is entertained by the idea of being a private because he thinks it will be a good chance for him to learn about life. His father, Village Chief Poon (O-Warut) doesn’t want him to be join the army but he cannot win his son’s determination. Paan goes to Bangkok with his friend, Aum (Jieb Chernyim) to train at the boot camp. Paan pretends to speak with “Supan” accent and tells everyone that he only finished 4th grade. Not long after, Paan is assigned to be the driver for the military doctor, Captain Chaweepong (Diana Chungjintanakarn), a daugther of Colonel Puan (Nino-Metani). Colonel Puan doesn’t like Paan at first sight and always tries to pick a fight with him. Paan and Chaweepong fall in love anyway, but﻿ Paan has to prove himself worthy of the Colonel’s daughter. Credit: rtn1212.wordpress.com