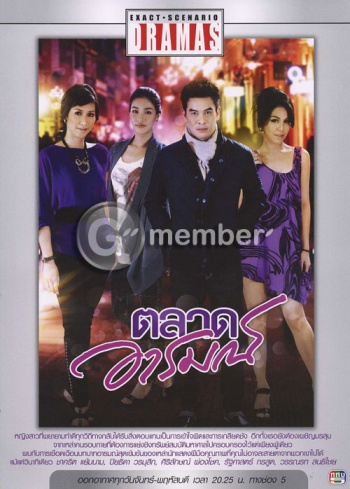 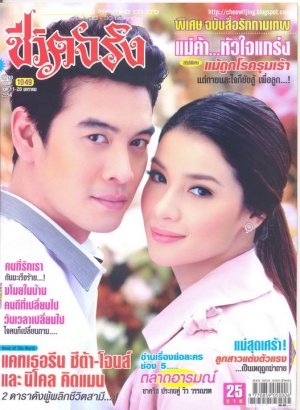 "Trat (Chakrit) is the heir to one of the richest companies in Thailand. He lives in America with his girlfriend (Joy) and comes back to Thailand after years of self-impose exile from his father who married a woman he disapproved of. After years away, he returns to Thailand for his father’s funeral and his stepmother (Pok) wants him to take over the family business, he doesn’t want to because of his prejudice towards her. While in Thailand, he meets a young woman by the name of Gang and starts to have a relationship with her. When he learns that Gang is actually his stepmother’s niece, he mistakenly thought his stepmother deceive him and was scheming something. After that he decides to start working for the company but with one condition, Gang has to work with him. (this was a quickie write-up, I’ll edit later)" (From Lyn's Lakorn Blog [1])

After the death of his first wife, Trai Wipakyothin (Dilok) brings home a prostitute girl Mongkote ('Pok) and make her his second wife. This upsets his son, Trat (Chakrit) so much that he look down on Mongkote and try to kick her out of the house. The father and son has an argument to the point that Trat vow to cut ties and never come home again. Trai is hurted by his son's decision that he gets a heart attack. Years passes and Trai's condition gets worse and worse. Before he dies, he makes Mongkote promise to have Trat take over his father's business, which is one of the richest real estate moguls. Mongkote says in tears that she will do anything to complete his last wish.

As for Trai, he has lived in America ever since the incident with his father. There he has a girlfriend Chalotorn ('Joy) who is an opportunistic and a gold digger. After knowing from Raksa (Noom) that Trat's father has passed away and he has become the heir of the business, Chalotorn persuades him to come back to Thailand. Trat reluctanly agrees to.

No one knows that Chalotorn has a dark past. She used to be someone's mia noy (mistress). She used his money to study abroad and dumped him later one. Her family is poor, so all of her family members willingly support her digging money except for her half-sister Chalatarn (Aerin). Because of that Chalatarn and her mother hate her so much, which results in Chalatarn getting abused and beaten around quite often.

At Trai's funeral, Trat comes to pay his last respect to his father. Mongkote appears and hopes that Trat will complete his father's wish. However Trat instantly rejects as he still holds grudge against Mongkote. Chalotorn sees this as an opportunity and makes a deal with Mongkote. Mongkote gives her a check of 10 million bahts, which Mongkote later reveals that this will test Chalotorn whether she is faithful or not. Of course Chalotorn doesn't go along with the plan she promised; instead uses the money to buy luxury things for her ownsuch as a car and a condo, which she lies to Trat that they are her parents' , and lies to Mongkote that she uses these things to help Trat see the things he will receive if he accepts Mongkote's demand. However her plan backfires her as Trat goes on a rage at the welcome party and openly expresses his hatred against Mongkote. Mongkote understands that Trat has never been influenced by such luxury things like Chalotorn said and takes away everything from her. Mongkotes becomes Chalotorn's main enemy.

Despite the coldness of Trat toward her, Mongkote still tries her best to make him change his mind. This, however, approach many obstacles. One of them is Pichit (Pepper), a major shareholder of Wipakyothin's cooporation and a playboy. He tries to sleep with any girls he finds worthy. He always wants to own Mongkote, from her body to her positions. He knows Chalotorn hates Mongkote so much, so he threatens her to join their alliance with the picture of Chalotorn being poor (street vendor). Fearing that the truth will be exposed to Trat, Chalotorn reluctanly agrees and eventually the two have sex, without knowing that Pichit recorded the whole duration. Things change when Pichit meets Chalatarn at her flower shop. He falls in love with her at first sight, not knowing she is Chalotorn's half sister.

Chalotorn continues to cause trouble for Mongkote non-stop. One day Mongkote runs across Chalatarn, from whom Mongkote knows the truth. So she drives off to Chalotorn's house and pay a huge amount of money to get to know all of Chalotorn's past. Being a money hungry, Chalotorn's mom (Duangta) tells all the truth with no doubts. Mongkote later uses the information she got and threaten to kick Chalotorn out. Desperated by this situation Chalotorn vows to take revenge. One day she accidentally hears Mongkote say to Chalatarn she has a dirty secret that can't be revealed to anyone. So Chalotorn does anything to expose that secret. However, the moment she's holding the box of truth, Mongkote appears with a gun and threatens to shoot her if she dares to open it. Chalotorn also finds out about the sex tape and her half sister's relationship with Pichit. She shows her the clip and Chalatarn gets very upset. Chalotorn then makes a deal to take care of Pichit if Chalatarn reveals Mongkote's secret at her last meeting with Broad of Directors. Chalatarn instead exposes everything about Chalotorn and Pichit and walks away in tears. Chalotorn is unmasked and kicked out of the house by Trat.

Mongkote has a niece, Gang (Vill). She works as a volunteer at a social organization, along with her best friends, Mattana (Best) and Wasin (Bua-ngam). Because of putting herself to dangerous sometimes, Mongkote forbids her many times. One day her motorbike gets hit by Trat's car. He helps her out and take care of her nicely. This leaves a lasting impression to Gang and she refers him "p'Superman". She laters hang out with him often and they fall in love. She has absolutely no ideas that he is the Trat she despises so much for hating her aunt. Eventually the truth reveals and everyone is very shocked. Trat thinks of a way that suggested by Chalotorn that he agrees to Mongkote's demand to take over the business under the condition that Gang must work for him to extract revenge. However, this is only a way for Trat to get closer to Gang. The two reconcile and love each other even more, although Gang still does not forgive him for hating his aunt. Trat is very confused and finally he comes to the decision of forgiving Mongkote. Mongkote is very happy by this.

Chalotorn, who is now penniless and loveless, decides to take revenge of her half sister whom she claimed to have destroyed her life. Chalatarn is very scared and runs to Mongkote. Mongkote suggests that they come to a women insititute where Mongkote came a long time ago to calm herself out. Chalotorn eavesdrops the adress so she goes there with the intention of killing them both. Her plan backfires and she nearly dies. She accidentally stumbles to an old record, which contains the secret of Mongkote. Chalotorn threatens to expose it to Gang but when she is about to do so Mongkote shoots her 4 times in cold blood. Chalotorn dies and Mongkote is put behind bars. Gang is very upset and finds any ways possible to bail Mongkote out. However, Mongkote is too ashamed of her doing so she writes a letter that shows her unconditional love for Gang while reveals the truth to Trat and gives him the box of secret. The next day Mongkote commits suicide.

At Mongkote and Chalotorn's funeral Trat shows Gang the box and opens it. Inside the box is a picture of Mongkote holding a baby girl. He reveals that 18 years ago, Mongkote was raped and became pregnant. At that time, Gang was having a high fever and Mongkote couldn't afford the medicines needed. As she was about to jump down the bridges Trai stopped her and took care of her then. Because of that Mongkote always kept the truth of being a mother to Gang for fear of she would never be able to face the truth. Gang brusts into tears and goes to pay her last respect to Mongkote, wanting to be her daughter again in the next life. Pichit also comes to pay the last respect for Chalotorn, hoping that she will forgive him. In the end, everybody realizes their fault and forgives each other. All the couples admit that they love each other. THE END!