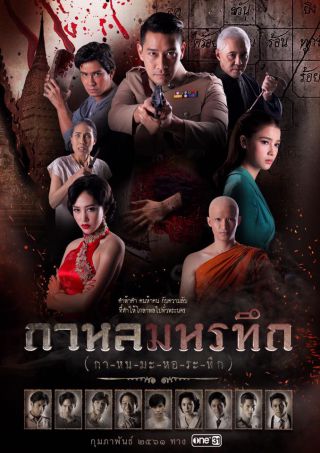 In 1953, while The Great Easter Asia war had been happening. It has dreadful murder case at Bangkok, see mysterious tattoos on dead body at wrist, over forehead and ankle. This is beginning of weird serial homicide in Bangkok' - Inspector of Investigate division Pol.lt. Col Waytarng Phiromruj got reporting, found dead girl in residence at Rakung Dusitraram temple. Body looked like to be poisoned and be hit at the back of head untill it was broken - This case's full of mysterious thing in initial investigate. Mother of dead also give circuitous testimony. They see 5 tattoo word --- [Yao, Jao, Pae, Ting, Pong] - Moreover, this incident repeatedly happen in short time. Second victim isn't die but.... - What they see is so weird and next case will happen in next day. This time, tattoo looks dim. They almost can't read it...Maybe, this case has been happened for long times and ...First body wouldn't be as they saw - Every event can strangely connect together but mysterious tatto looks different in each time when it's appear, hardly find the connection. What a reason? That's what Pol.lt. Con. Waytarng, Pol.Capt Chane and Pol.Lt Krabi must find out murderer together - All of clues bring them to weird serial homicide and mysterious tattoo which is around Thon Buri and Bangkok. History's scar and art language secret will be unveiled soon.