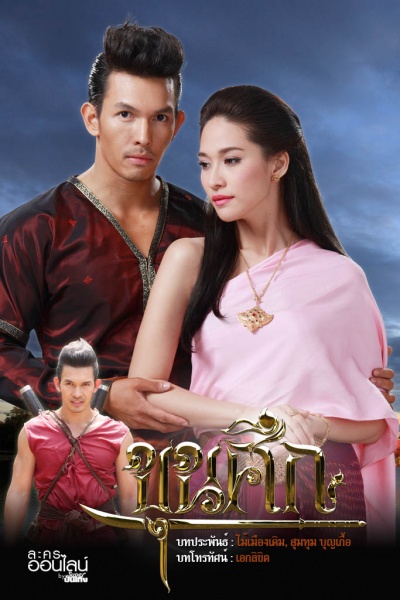 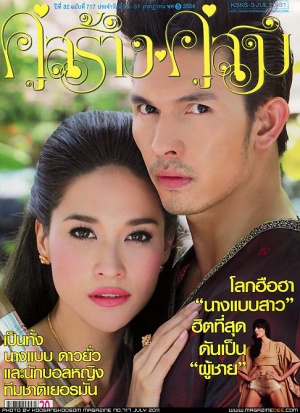 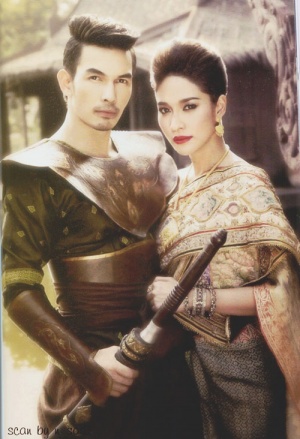 Khunsuk is a Thai historical action and love-story movie.It’s a tale of Sema (Aum Atichart), a boy from a poor family. The story is sets in Ayutthaya epic. All about battle and fighting for keep the country free. Sema has to decide if he wants to continue doing his father job, a sword maker or serves the country being a soldier beside the King. The tragedy of the story is this poor guy falls in love with a rich girl. Of course the girl’s father has a rich decent guy waiting for his daughter. Sema who decides to try his chances as a soldier and runs into conflict with an egotistic fighter over the attentions of an attractive rich young girl which is Rerai (Ploy Chermarn). Will true love overcome in the end?

Sema (Aum Atichart) is the intelligent son of a poor blacksmith. He is talented with the two-hand sword technique and wants to use his skill to protect his country. His father entrusted Sema to his friend Paaintra (Sorapong Chatree), and his adopted father brings Sema to train under the Military Chief Khun Ram. Sema is assessed by having a fight with the best swordsman Lieutenant Khan (Nott Vorarit) and Sema wins. From here, a grudge is instilled between Sema and Khan. He meets Reirai (Ploy Chermarn), a beautiful lady-in-waiting, for the first time when she visits her father Khun Ram. It was love at first sight. Sema receives his soldier status and meets Reirai again as she picks palm leaf flowers “dok jumpee” and he keeps the flower as encouragement. Somboon (Tui Kiatkamol) who has adored Sema since his fight with Khan informs him of Khan’s plans. Sema is angry and fights with Khan but is caught by Khun Ram. Sema is punished for crossing the line with his superiors. Reirai pities Sema and sneaks to meet him. She encourages him to build a title for him so they can have a future. Sema promises her and is confident now that she is reciprocating his feelings. War breaks and Sema has to go off to his first battle. Reirai is worried and gives Sema her golden ring. Sema promises that he will come back to return the ring to Reirai. Sema goes to war and is able to release his fellow soldiers and kill the leader, thus he is promoted. He returns Reirai’s ring to her. Khan is getting more and more jealous of Sema, so he devises a plan to hit on Sema’s sister Jumren (Baifern Patarin) and spreads the news of Sema a temple dog falling in love with Reirai a heavenly flower. Sema is laughed at. King Naresuan (Au Thanakorn) wants to build more forces and Sema presents himself and gains a higher rank. He returns and is happy that Reirai is still holding on to their love. Khun Ram hears of the situation and he is mad. Sema is still poor, making swords for money and meets his childhood friend Uurtang (Donut Manasnan) who has a crush on him and sells steel. Reirai hears about it and thinks that Sema is unfaithful and they fight. Reirai further misunderstands him as a cheater, and Sema follows to explain but is caught by Khun Ram who is furious at Sema for being together with his daughter. Reirai is punished and with a battle breaking out, Sema has to leave. The soldiers are fighting strenuously and Sema wins more respect. The Hongswadee retreats. Sema is further promoted but he is still poor and his family is in debt and dragged in slavery. Reirai has come out, but she is refusing proposals because she is waiting for Sema. She is conflicted because she is being a bad daughter. Sema hears and visits her, but Khun Ram find out and ambush Sema. Reirai doesn’t want her father and lover to fight so she promises to do as her father wishes. The father takes his chance to arrange the engagement between Reirai and Khan. Sema burns the house to ruin the engagement and ticks off Khan more. Khan gets revenge by getting Jumren to be his mistress. Sema sneaks into the house to free his sister but goes into the wrong room to meet Duangkae (Benz Pornchita) and he gets Khan back by rough playing on his sister. Duangkae falls for Sema. More battles ensue and Sema further wins more respect. Khun Ram is saved by Khan and starts to believe him more especially about Sema. The father discusses the Sema conspiracies with his family and this makes Reirai further agrees to marriage with Khan. Sema hears, and he and Reirai have a big fight. This stress causes Sema to make bad maneuvers, and he almost died in battle. The King wants to battle out the forces and assigns Sema the role. However because Sema is too preoccupied, they are defeated. The King is very angry and orders Sema to be executed but Sema is pardoned after requests. Sema is deranked and heartbroken. He goes to peek at Reirai’s engagement. He leaves her a palm leaf flower “dok jumpee” and Reirai’s cries. He then enters a competition to gain this way back in to redeem himself. An unbeatable opposing soldier enters Ayodthaya, and Sema is able to use his two-hand sword technique to kill the man. Sema excels through the ranks. He is fully pardoned and has enough money to pay off his family’s debt. Khan rushes his marriage to Reirai but Khun Ram becomes ill so it is held off. Reirai learns that she had misunderstood Sema that he was cheating on her and also that Sema was the one who saved her father instead but Khan took the credit. Sema and Reirai makes up, but she is still to get married. He says that their fate may end here and he will attempt to cut himself from her. The King orders Sema to battle and Sema captures the leader. Sema continues to win his battles. Finally, he surpassed Khun Ram’s rank and is indulged with wealth. The Hongsawadee infiltrates Ayodthaya. They invade and burn down the towns and everything. Sema is knighted to be the Warlord “Khun Suk” and Sema defeats the Hongsawadee. He returns with the biggest honor. Khun Ram learns about Khan’s evilness and withdrawals his daughter’s engagement with Khan. Sema proposes and finally, the couple is together. They wed. Shorty after this, Sema’s adopted father Paaintra dies and leaves his wealth, including the care of his daughter Seemeun (Oh Petchlada), to Sema. Reirai approves Sema to take in Seemuen as a second wife. The King dies and the new one discharges Sema from his duty.

Check out the Teaser for this Drama on youtube.