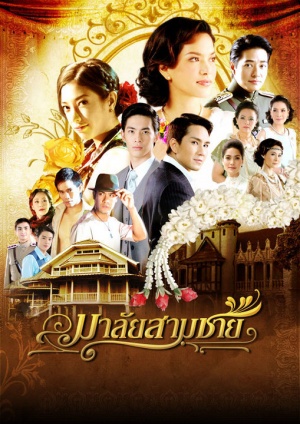 “Lhaor orn” is a particular lady living through 5 period of monarchy. There has been a lot in her life which make her undergo marriages for 3 times. Surrounded people have eyes on her very carefully. Still, she finally has herself acceptable by living valuably and gracefully.

Lhaor orn is a beautiful daughter of Sir Worapan and Lady Jamriang, yet her mother passed away since she was so young. Her Auntie, Jaruay brought her in the palace since then. She graduates from manner-training girl school and live as a royal highness’ service in palace ever since. She becomes one of woman courtiers out of the question. Later on, she gets married with “Yod Platorn”. But once she is disappointed with marriage life, she has got courage to leave him and escapes from “Platorn Family”, then live lonely as a proud widow.

When it comes to her second marriage, it seems everyone wonders if she could get as rich and honorable as the former. However they got surprised when her new husband fully outclassed her past one.

Lhaor orn is happy with her fine and dependable husband. Yet, when her second husband was dead, she has got enough rational reasons for the third marriage. He is a noble, single doctor from the North. It doesn’t seem he is compatible with a widow with kids in any ways.

Lhaor orn has lived a delightful life, and at the same time coped with the hardships in life in terms of balancing righteous and suitability. She has to face all the sensuality and jealousy involved her in moments of her living. What is the conclusion in the end…to be continued in Lady Lhaor orn.

The life story of Laorn a woman who has goodness and kindness and as pure as a wreath garland takes a turn when luck would betray her by bringing her to get into situations where she must have up to 3 husbands in her life. The 3 men are different in personality and style. Her first husband is Yot Pluton a happy go party person. He is her first love that shows her the dark side of love. The 2nd man in her life is Tape Ratsak a commanding officer in the military who is strong and stable. He is like the pillar and rock for Laorn, but as luck would have it he would be taken from her. After that she meets Jao Direk or Jor. He is a young surgeon that is handsome in all ways. He is like a magical well that brings her back to life once again.

The entire time regardless of her having have 3 husbands in her life Laorn is still admired by the people who knew her because of her kindness and the morals she held within her heart. Different from Tong Pairam a young woman from the Yellow Mask Brothel. Tong Pairam uses her charms to lure many men into her clutches. Not only does she ruin Laorn’s family, but she also causes the demise of many other men.

Kanong the most close and loyal servant of Yot even betrays his benefactor for Tong Pairam, but in the end he is killed by Kong Bai who is Yot’s horseback trainer and another lover of Tong Pairam. Narin a young man who is innocent to the world and the son of Jao Khun Narapibalur is also pulled into this trecherous circle which would lead to a tragedy between father and son

Laorn and Tong Pairam when come across one another they fight like water and fire, but luck would play tricks on them and bring them to constantly be involved with one another. The quiet and peaceful world of Laorn falls apart because the Lust and fire from Tong Pairom constantly consumes her.