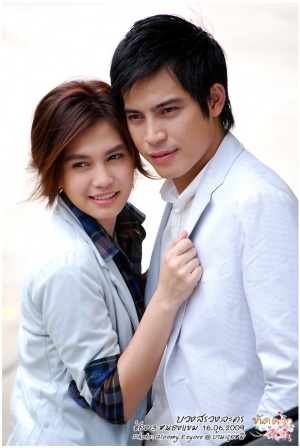 Den Bussaya got married with Jitree, the former miss beauty queen, but his mother disliked her, so she tried to get rid of her by looking for a new wife for him that was Duen. Duen was pregnant with her ex-husband and lied to Den's mother that she was pregnant with Den.

Jitree was hurt and ran away from him to stay in Chiang Mai. Later, Jitree gave birth to Taddao and taught her to hate her father, but she didn't know that Den sneaked to meet Taddao often. Later, Den wrote his will to give Bussaya house only to Taddao and left the will with Puang, his follower to take care of it before he died.

Jitree was indebted because of gambling, so she wanted to give Taddao to get married with Prince Wattana for money. Prince Yodkhwan or Prince Noi, Prince Wattana's son just came back from studying in America. When he knew that his father would get married with the young girl, he was angry and ran away from the palace to do farming with his follower.

Jitree told Taddao about her father's death and the will, so Taddao decided to run away from marraige to go to Bussaya House to look for the will. Tiang, her nanny helped her by letting her to disguise herself as a boy named Sutad and asked Prince Yodkhwan to take them to go with him.

When Taddao knew that Prince Yodkhwan was a friend with Witoon, her stepmother's brother, she asked him to take her to Bussaya House to look for her father's will, but she didn't tell him that she's a girl. Prince Yodkhwan agreed to help but he gave her the condition that she must obey him and do everything he told her to do.